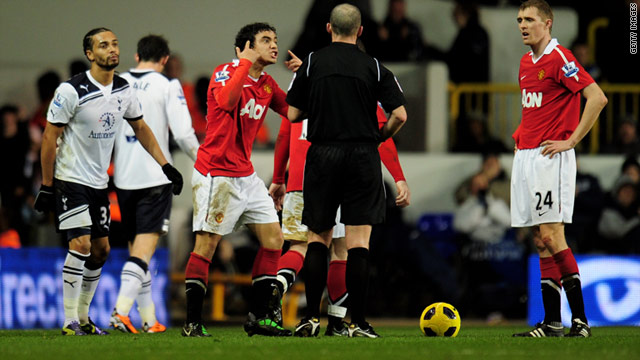 (CNN) -- Manchester United returned to the top of the Premier League on Sunday after a 0-0 draw against Tottenham Hotspur at White Hart Lane.

A close fought affair -- which marked the 600th league appearance of Ryan Giggs -- ended with honors even despite United defender Rafael Da Silva being sent off for two bookable offences in the 74th minute.

His second yellow for a trip on Assou-Ekotto was adjudged to be deliberate, but a clearly incensed Rafael thought otherwise as he remonstrated with referee Mike Dean about the decision.

Spurs had the better chances to win the match with Rafael Van der Vaart missing a glorious opportunity to claim three points in the 80th minute after a mistake in the United defence gave him a unopposed shot on goal.

But the Dutch international could only curl his shot narrowly over the bar.

Kenny Dalglish earned the first point of his second spell in charge of Liverpool as the Merseyside derby against Everton ended in a 2-2 draw at Anfield.

Raul Meireles' first goal for Liverpool gave the Reds a deserved lead after 30 minutes in a half in which they dominated.

But Everton hit back after the break with two goals in six minutes to take the lead.

Sylvain Distin headed home after 46 minutes and Jermaine Beckford stunned the home supporters as he drilled home past Jose Reina to hand the Toffees the lead.

But when Tim Howard brought down Maxi Rodriguez following a corner in the 66th minute, Dirk Kuyt made no mistake from the penalty spot.

Liverpool and Everton both have 26 points, with Everton one place above their rivals thanks to a superior goal difference.

In the other two matches played Sunday, the Tyneside derby ended in a 1-1 draw as Sunderland's Asamoah Gyan scored four minutes into injury time to deny Newcastle the three points and a season double over their arch rivals.

A neat backheel by Kevin Nolan had given the Magpies the lead seven minutes into the second half.

Newcastle looked destined to win the match until the Ghanaian striker put the ball in the net after a shot from Phil Bardsley shot had been saved by Steve Harper.

Sunderland stay in sixth place, while Newcastle are ninth.

Aston Villa have moved out of the relegation zone after salvaging a 1-1 draw with local rivals Birmingham at St Andrews.

Roger Johnson volleyed home early in the second half to give the home side the lead but James Collins squared things up after 73 minutes when he drove a shot home after Gabriel Agbonlahor had flicked the ball onto him.

Birmingham remain in 16th place with 23 points on points, one place and one point ahead of Villa.