Holders Iraq go through to quarterfinals 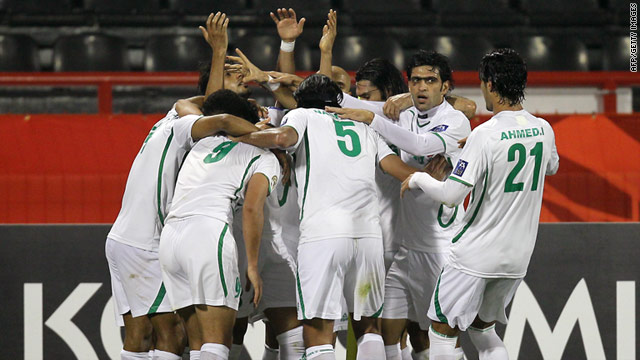 Iraq players celebrate the goal that secured their place in the last eight of the Asian Cup.
STORY HIGHLIGHTS

(CNN) -- Holders Iraq sealed their place in the last eight of the Asian Cup in Doha after a narrow 1-0 victory over North Korea.

A goal midway through the first half from Kerrar Jasim proved enough to gain Iraq second place in Group D and secure a showdown with Group C winners Australia, with a semifinal place for the winners.

Meanwhile, police in the Sunni town of Falluja, 60km west of Baghdad, told CNN they imposed a curfew during the match to prevent people from shooting in the air in case of an Iraqi victory.

It is an Iraqi tradition to celebrate by firing pistols or machineguns into the air, but Baghdad Military Operation Command issued warnings that some insurgency groups might take advantage of these shootings and conduct terrorist attacks against Iraqi security forces or civilians.

Elsewhere in the Asian Cup, Iran comfortably topped the group with a maximum nine points -- the only nation to achieve that target -- after cruising to a 3-0 victory over United Arab Emirates despite fielding a weakened side.

Having already qualified, Iran made nine changes to their side, but they still proved far too classy for their opponents, who finished the group bottom and without a win or goal to their name.

Arash Afshin, Mohammad Nori and a Walid Abbas own goal gave Iran victory although both teams finished with 10 men after Afshin and UAE defender Khalid Sebil both saw red in separate incidents.

Iran will now face South Korea for the fifth consecutive time at this stage of the tournament.

The quarterfinal stage gets under way on Friday, with host nation Qatar tackling three-time champions Japan and Group A winners Uzbekistan facing Jordan.