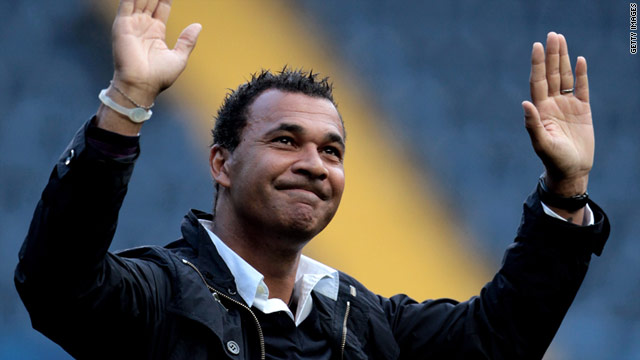 (CNN) -- The appointment of legendary Dutch midfielder and former Chelsea manager Ruud Gullit as the manager of a team in the once-war-torn Russia republic of Chechnya has left football experts and Caucasus watchers stunned.

His boss there will be Ramzan Kadyrov, the former rebel fighter who is now the Kremlin-backed president of Chechnya.

For years, Kadyrov, who is credited with bringing relative stability to the region, has been dogged by accusations of human rights abuses -- vehemently denied -- as he fought a brutal campaign to bring an end to Chechnya's bloody insurgency.

Kadyrov said Wednesday he was excited to welcome the Dutchman to the club of which he is president, adding that with Gullit, who coined the phrase "sexy football" in charge, Terek now had a serious chance of qualifying for the Champions League.

Gullit declined to comment when contacted by CNN about his move, but in interviews with two Moscow sports newspapers published Thursday he admitted knowing little about Terek Grozny until being named manager and was "stunned" by the offer to take charge.

Gullit added that he did not expect to spend much time in a city only now rebuilding from two wars in the past 15 years.

Obviously I could have never possibly imagined one day ending up in the Caucasus.
--Ruud Gullit
RELATED TOPICS

"Obviously I could have never possibly imagined one day ending up in the Caucasus. Terek's phone call stunned me. But life is full of surprises," Gullit told Sovetsky Sport.

Some Russian commentators have suggested that Gullit may have a hard time adjusting to life in Chechnya after spending his recent years managing clubs in Los Angeles and London.

Gullit told the Sport Express daily that he would "only be coming to Grozny for the matches" and would spend more time at a team training base about 200 kilometres (120 miles) west of the Chechen capital.

"The only thing that concerns me at this point is the language barrier," he added.

However one Caucasus expert James Nixey, from London-based think tank Chatham House, told CNN he suspected Gullit was not fully aware of conditions in Grozny. "Maybe he doesn't understand the human rights situation there, but few people do.

"Kadyrov rules with a rod of iron and there is no opposition to his rule. Gullit will need to tread carefully."

One Russian news website mocked the move. "Maybe Gullit read Wikipedia and decided that Kadyrov is a Mandela-like figure," wrote lenta.ru, according to a translation by the Independent newspaper.

Gullit dedicated his European Player of the Year Award in 1987 to Nelson Mandela and has interviewed his hero on his Dutch television talk show.

"He'll have the chance to discern the difference between the intellectual South African leader and this lover of tracksuit bottoms and gold-plated pistols when he meets Mr Kadyrov on 22 January," wrote the website's editorial.

Football experts were also confused as to why Gullit is going. Gavin Hamilton, editor of World Soccer magazine, said: "Nothing surprises me about footballers going anywhere now. But Gullit may not realise how much interference he will get from the president (Kadyrov)."

Gullit admitted he knew little about the team or its players when he was offered the job. "I have a couple of tapes of some Terek matches. But I have only managed to watch segments from a few of their games," he told Sovetsky Sport.