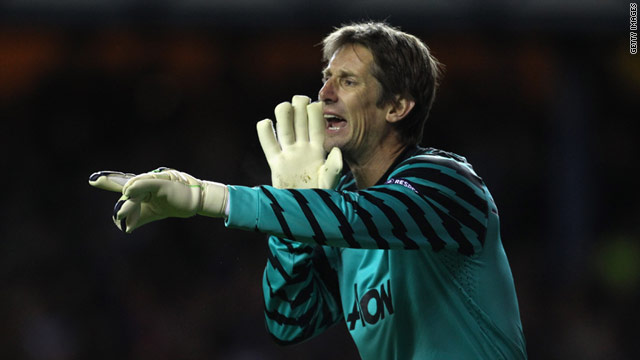 (CNN) -- Manchester United goalkeeper Edwin van der Sar will retire from football at the end of the season, he announced Thursday.

The 40-year-old former Dutch international has been at Old Trafford since 2005, winning three English Premier League titles and helping them to their Champions League triumph in 2008.

Van der Sar began his professional career with Ajax Amsterdam, helping them to the Champions League in 1995.

He subsequently had a spell in Italy with Juventus before joining United's fellow Premier League side Fulham.

"It's been coming for a while," van der Sar told the official Manchester United website.

You can't play Superman into your 40s. It's a mutual decision that this season was the last
--Edwin van der Sar
RELATED TOPICS

"After playing for so many years, you reach a point where you have to make a decision.

"There are a couple of things to consider -- whether you still have an appetite for it, your family.

Van der Sar's wife Annemarie collapsed with a brain haemorrhage in December 2009 and he admitted that retirement had been "playing on my mind" since that health scare.

Van der Sar, whose brilliant save from Nicolas Anelka clinched their penalty shootout win over Chelsea in the 2008 Champions League final in Moscow, has remained in fine form during United's unbeaten start to the season.

But he said he wanted to out out at the top.

"You can't play Superman into your 40s," he added.

"It's a mutual decision (with manager Alex Ferguson) that this season was the last. When I first came here I was just happy to sign a two-year contract.

"I wanted to win the league before I retired. I was lucky to achieve a little bit more than that."

Van der Sar won a record 130 Dutch caps before announcing his international retirement at the end of the 2008 season.