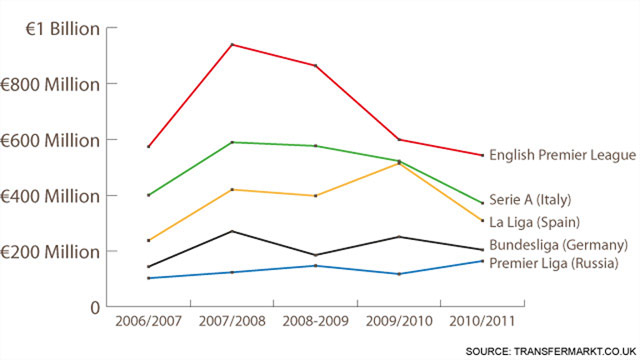 Spending on new players at Europe's top football clubs, as of Friday January 28, had fallen to the same level it was five years ago (figures from transfermkt.co.uk), but could last-minute deals inflate this depressed picture?
STORY HIGHLIGHTS

(CNN) -- Deadline day of the European transfer window has traditionally been one of wheeler-dealing drama and big-money deals, as world soccer's biggest clubs fight to recruit new players before the market slams shut.

Rumors abound as to which superstars of the pitch will use the rapidly diminishing opportunity to find a new employer, and 2011 has all the hallmarks of a classic climax to this period of football commerce.

Despite the excitement, many of the lucrative deals that are reportedly on the table are being placed against the backdrop of reduced transfer spending in a continent that has been hit by economic downturn.

According to the latest statistics from website Transfermarkt.co.uk, clubs in Europe's top football leagues have had to severely restrict their spending in the January sale period, which comes to a close at 2300 GMT on Monday.

While the current figures for the top leagues in England, Germany, Italy, Russia and Spain are on a par with those seen at the height of the downturn in 2010, they are considerably lower than those from the two previous seasons and nearer to those spent back at the same time of the year in 2006.

Dan Jones, a partner in the Sports Business Group at UK business advisory firm Deloitte told CNN that both the global economic situation, as well as new "Financial Fair Play" rules from European football's governing body UEFA -- which prohibit clubs from spending more than they earn -- have contributed to the lower revenue.

"So far Premier League clubs' spending in this January transfer window has been relatively restrained, with only three clubs -- Aston Villa, Manchester City and Newcastle United -- having spent more than €6 million, based on reported deal values to date," Jones said in a statement.

"The combination of a continued lack of available credit, reduced operating profitability and liquidity, and clubs striving to improve their financial balance, all point towards fewer transfers involving a fee than in many previous January windows."

But Jones also said that the numbers are not entirely unexpected and that with hours of trading to go until sales have to be completed, there is still time for clubs to secure further deals.

"Compared to the pre-season, January is often a relatively 'quiet' window, with total gross spending often driven and dominated by a relatively small number of high-value transfers, as has been the case so far this month," he said.

However, with reports that Chelsea are on the verge of signing Liverpool's Spain striker Fernando Torres for a record British transfer fee and with Tottenham Hotspur linked with Atletico Madrid's Sergio Aguero, maybe the bear market will become a bull.