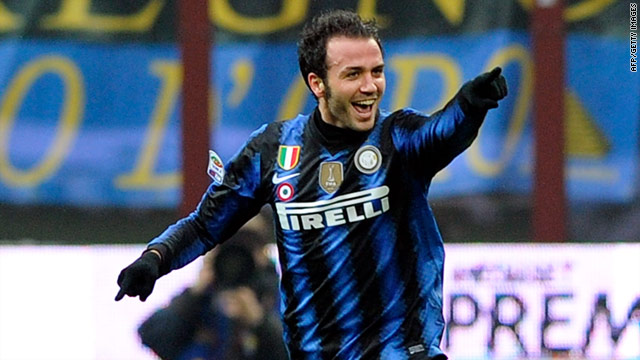 Two-goal Giampaolo Pazzini enjoyed a dream debut for Inter Milan as they fought back to defeat Palermo 3-2.
STORY HIGHLIGHTS

(CNN) -- Inter Milan kept their Serie A title hopes alive as striker Giampaolo Pazzini scored twice on his debut to help them recover from a two-goal deficit to beat Palermo 3-2 at the San Siro.

The Italian champions signed Pazzini on a four-and-a-half year contract from Sampdoria for $16m earlier in the week -- and he repaid that faith straight away with a match-winning second-half performance to delight the home crowd.

But two minutes later it was Palermo who went in front as Mattia Cassani skipped around Davide Santon and crossed for Miccoli to tap home from close range.

And Palermo doubled their lead nine minutes from half time when Antonio Nocerino turned defender Maicon before beating goalkeeper Julio Cesar at his near post.

The match could have been all over before the break when Javier Pastore struck the post with a fierce drive.

Inter coach Leonardo introduced Pazzini as a second half substitute and he made an instant impression, holding off his marker to convert a chipped pass from fellow-debutant Houssine Kharja in the 57th minute.

Palermo then wasted a glorious opportunity to double their lead again, but Pastore's penalty kick, given after Thiago Motta had fouled Pajtim Kasami, was turned onto the post by Cesar.

I never imagined having a day like this, it really was a dream to play with so many great players
--Giampaolo Pazzini
RELATED TOPICS

The home side made Palermo pay for that missed opportunity, levelling in the 73rd minute when Pazzini headed home Maicon's free-kick at the near post.

And the turnaround was complete just three minutes later when Samuel Eto'o scored from the penalty spot after Ezequiel Munoz had fouled Pazzini.

"I never imagined having a day like this, it really was a dream to play with so many great players," Pazzini told Italian TV station SkySport.

The result means Inter remain in the title race, although they trail leaders and city rivals Milan by nine points, they do have a vital game in hand.

Milan won 2-0 at Catania on Saturday evening thanks to goals from Robinho and Zlatan Ibrahimovic.

However, they had to do it the hard way after having Dutch midfielder Mark Van Bommel sent off on his debut following two bookable offences.

Milan are four points clear of second-placed Napoli, who crushed Sampdoria 4-0 on Sunday aided by a hat-trick from Uruguayan Edinson Cavani -- the division's top scorer with 19 goals.

Meanwhile, in Sunday's late match, the pressure has increased on Juventus coach Luigi Del Neri after his side slumped to a 2-1 home defeat against Udinese -- their fourth loss in seven games in 2011.

Goals from South Americans Christian Zapata and Alexis Sanchez sealed the three points for the visitors, who are now up to sixth in the table with Juve one point behind them in seventh position.

There were two matches played in Germany's Bundesliga on Sunday and both ended up in 1-0 wins for the visiting sides.

Freiburg secured victory at struggling Stuttgart thanks to Johannes Flum's first-half goal, while Igor de Camargo's late strike was enough to give bottom side Moenchengladbach a narrow win at Eintracht Frankfurt.

Moenchengladbach and Stuttgart are now level on 16 pouints at the foot of the table, while Freiburg moved up to sixth place following their success.