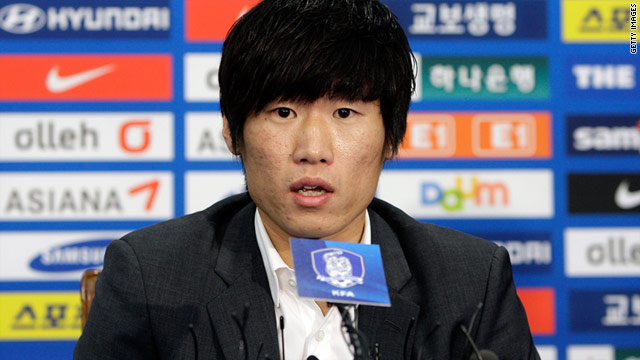 The Manchester United star won his 100th international cap at the Asian Cup last week, as South Korea lost on penalties to eventual winners Japan in the semifinals.

Speaking at a press conference of the Korea Football Association in the country's capital Seoul on Monday, the 29-year-old said he wanted to give up his place in the team to make way for a new generation of South Korean players.

"I am announcing my retirement to open more doors for younger, junior players who have to grow to replace me eventually," Park told reporters.

He added that a right knee injury, for which he has undergone two major operations, also played a part in his decision.

"I think without health issues I could have continued my international career. But I will accept the situation as it is and I have no regrets."

Park was not included in the squad who defeated Uzbekistan in Friday's third-place playoff match in Qatar, but the news that he was to step down as South Korea captain was announced by coach Cho Kwang-Rae after the match.

Reacting to Park's decision, and also that taken by former Tottenham Hotspur defender Lee Young-Pyo to retire from international duty, Cho said: "They did a remarkable job for Korean football and I want to say I have loved working with them.

"It would be better if I could keep both of them in the national team but they have done an excellent job and I'm sure the Korean fans would like to congratulate them for all their hard work."

Park, who made his international debut 2000 before going on to play in the 2002, 2006 and 2010 World Cup's, said the future of South Korean football was in safe hands and singled out compatriots Koo Ja-Cheol, Ji Dong-Won and Son Heung-Min as players who would have a particularly bright future in the national team.

"Like we have seen during the Asian Cup games, there are many young Korean players who have enormous potential, passion and talent," Park, who led South Korea to the World Cup semifinals on home soil in 2002, said.

"My departure will help more young players who have demonstrated their talent and ability during the Asian Cup to prepare for the next World Cup."

The former Kyoto Purple Sanga and PSV Eindhoven player added that his retirement was definite and he would not be tempted back into the fold even if South Korea qualified for the World Cup finals in Brazil in 2014.

"It's the players who will make that happen. Thus the opportunities to play should be given to them alone.

"Just like I was given an opportunity for enormous growth during the 2002 World Cup, I think it is necessary to give good opportunities to junior players through generational change."

Park became the first Asian to play in a UEFA Champions League final, when Manchester United lost to Barcelona in 2009.

And he said that despite his international career being over he had no plans as yet to leave the Premier League leaders, who he has been with since 2005.

"I haven't decided when I'll quit. I think I can play at least three to four more years," he added.