'Cocky' Ronaldo ridiculed by 'the Rifle' 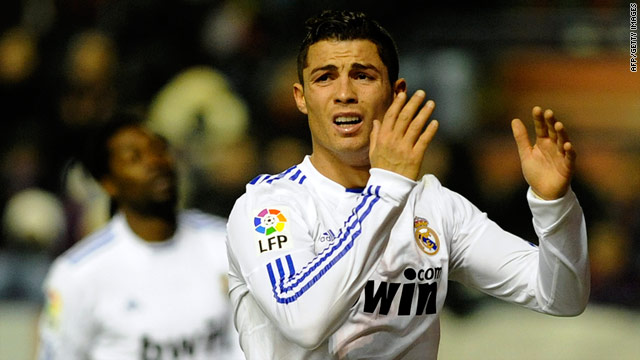 (CNN) -- He's the most expensive player in the world, and one of the best paid, but Cristiano Ronaldo was given a very public reminder on the need to be humble on Wednesday.

The Real Madrid superstar was told he is "cocky" and "has a screw loose" by veteran Uruguayan striker Walter Pandiani, who clashed with Ronaldo during lowly Osasuna's shock win over the Spanish giants on Sunday.

The 34-year-old Pandiani, nicknamed "the Rifle," spoke out at a press conference after becoming angry when Ronaldo reportedly asked him how much he earned during Real's defeat -- which left Jose Mourinho's team seven points behind La Liga leaders Barcelona.

"It is quite right, what has been said happened. When he wins the (Spanish Cup), the Super Cup and the titles I have, then maybe I will listen. In our field we are respected," Pandiani told reporters.

What Cristiano should do is learn from Lionel Messi, and leave out this cocky attitude. He is the one who creates all the problems
--Walter Pandiani
RELATED TOPICS

"Barcelona, they are a team of people. Madrid footballers do not deserve such treatment, but pay for the follies of others. Madrid is paying for Cristiano's cocky attitude."

Pandiani, who has spent most of the past decade with Spanish clubs but like Ronaldo also played in England, said the Portugal captain should take lessons from Barcelona's two-time world player of the year Lionel Messi.

Real and Barca to meet in Spanish Cup final

"What Cristiano should do is learn from Lionel Messi, and leave out this cocky attitude. He is the one who creates all the problems, every weekend, and should be penalized," Pandiani said.

"He should look to be the best in the world, and see if he is able to learn a little more. He has a screw loose. He has to learn to be more humble."

Pandiani has won the Spanish Cup three times, with Deportivo La Coruna, Mallorca and Espanyol, and was a Uruguayan champion with Penarol in 1999.

Ronaldo enjoyed a trophy-laden stint with Manchester United, winning the European Champions League and three English titles plus three cups along with several top individual awards, but the 25-year-old has yet to earn any silverware since joining Real in a record $130 million deal in mid-2009.