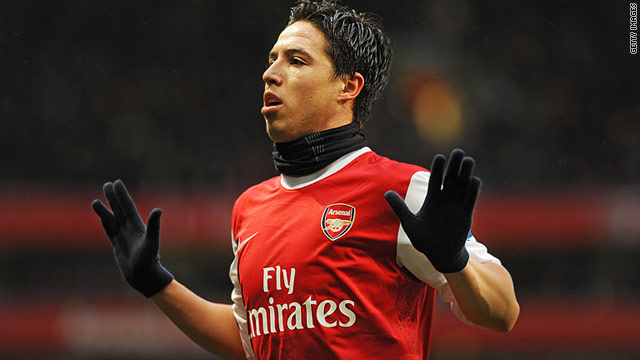 Arsenal's France midfielder Samir Nasri is a fan of the snood.
STORY HIGHLIGHTS

(CNN) -- They are the beautiful game's must-have fashion accessory -- but now soccer's governing body are considering a ban on snoods.

The trend of wearing a neck-warmer has become prevalent in the European game, especially in the English Premier League with stars such as Manchester City's Carlos Tevez and Arsenal midfielder Samir Nasri sporting them.

But FIFA now say they could be outlawed from football if they are proved to be a safety issue.

A FIFA spokesman said: "We want a debate over the snood and whether it could be dangerous.

"There may be a safety issue -- if for example a player was running through on goal and an opponent grabbed his snood, that could pose a potential danger to his neck."

We want a debate over the snood and whether it could be dangerous.
--FIFA
RELATED TOPICS

The snood will be debated when football's law-making body, the International FA Board (IFAB) meets in March.

The snood has divided players and managers too.

Former Manchester United player Roy Keane had his say on snood-wearing players when manager of Ipswich: "They've all gone soft. I don't know how they do it and focus on the game, it's weird. That's the way the game's gone."

Meanwhile, two FIFA executives accused of corruption during the bidding process for the right to host the World Cup in 2018 and 2022 have had their appeals rejected.

Nigerian Amos Adamu and Tahitian Reynald Temarii were suspended by FIFA's Ethics Committee in November after they allegedly offered to sell their votes.

Adamu's three-year ban was upheld while Temarii was instructed to complete his 12-month suspension by FIFA's Appeal Committee.