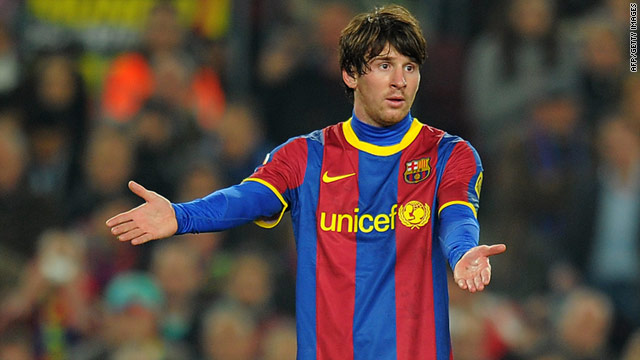 Barcelona's hat-trick hero Lionel Messi took his goal tally for this season to 40 in the 3-0 win over Atletico Madrid.
STORY HIGHLIGHTS
RELATED TOPICS

The two-time world player of the year netted all three goals against Atletico Madrid to take his total to the season in all competitions to a staggering 40.

Josep Guardiola's team went 10 points clear of Real, who host Real Sociedad on Sunday, and have now scored 70 goals from 22 league matches -- the most of any team in the main European divisions.

Barca have also conceded only 11 times in that period, and the closest they came to a 12th against Atletico at Camp Nou was when Gerard Pique cleared off the line from Felipe Luis with the score at 2-0.

Messi broke the deadlock in the 17th minute as he cut in from the right in trademark fashion and fired a left-foot shot from the edge of the box across goalkeeper David de Gea.

The 23-year-old doubled the lead in the 28th minute, pouncing after David Villa's threaded pass bounced kindly into his path.

The forward duo combined again for the third with 11 minutes to play, with Messi this time teeing up Villa and then reacting fastest when the Spain international's shot rebounded off the legs of De Gea.

It was Messi's first hat-trick of 2011, coming off his six in the previous calendar year. He is now on course to easily surpass last season's tally of 47 with more than two months left to play.

Messi also hit the crossbar with a second-half free-kick, but was booked for taking it too quickly.

The result left Atletico in seventh place on goal difference above Getafe, who won 4-1 at home to Deportivo La Coruna earlier on Saturday.

Villarreal retained third place despite suffering a shock 1-0 home defeat by Levante, who moved off the bottom thanks to Valmiro Valdo's winning goal three minutes after halftime.

The former Espanyol midfielder collected a long pass and rounded goalkeeper to inflict Villarreal's first home defeat since May, having dropped points only once at El Madrigal this season against fourth-placed Valencia.

Athletic Bilbao moved up to fifth with a 3-0 win at home to Sporting Gijon, who had defender Gregory Arnolin sent off for a second booking that led to David Lopez's 15th-minute penalty opener.

Gaizka Toquero doubled the lead in the 28th minute and striker Fernando Llorente sealed victory in the second half.

The Basques leapfrogged Espanyol, whose European qualification hopes were hit by a 3-2 defeat at second-bottom Almeria.

The Barcelona-based team could not come back from a 3-0 deficit inside 18 minutes.

That result put Malaga, who travel to Sevilla on Sunday, at the foot of the table.

Real Zaragoza were held 1-1 at home by struggling Racing Santander, while Mallorca earned the same result at Osasuna.

In Italy, Udinese moved up to fifth place with a 2-0 win at home to Sampdoria as Chile midfielder Alexis Sanchez opened the scoring in the 18th minute and striker Antonio Di Natale netted his 100th league goal before halftime.

Sampdoria, who sold star strikers Antonio Cassano and Giampaolo Pazzini last month, suffered a fourth consecutive defeat to be 13th in the Serie A table.

Juventus lifted the pressure on coach Luigi Delneri with a 3-1 victory at Cagliari that lifted the Turin club up to seventh.

January signing Alessandro Matri scored the opening two goals against his former club, while veteran striker Luca Toni came off the bench to seal victory six minutes from the end with his first for Juve.