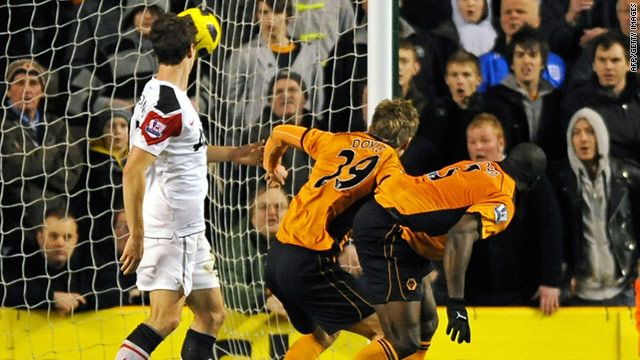 The leaders lost 2-1 at bottom club Wolverhampton on a day that saw title rivals Arsenal draw 4-4 with Newcastle, as an unprecedented 41 goals were scored in eight matches -- the previous record for one day was 36.

United ended the day four points clear of Arsenal, with Manchester City another point back on 49 after beating West Brom 3-0 thanks to a first-half Carlos Tevez hat-trick.

It's disappointing, it's been a long run for us. Wolves are a handful at set-pieces and they proved that again today
--Man United boss Alex Ferguson
RELATED TOPICS

Chelsea are 10 points adrift ahead of Sunday's home clash with Liverpool, which should see new signing Fernando Torres face his former team.

Fifth-placed Tottenham beat Bolton 2-1 in the day's other lowest-scoring match, alongside Wolves-United, and even that game featured a missed retaken penalty and another awarded and then wiped out.

Despite losing England defender Rio Ferdinand to a calf injury in the warm-up, United made the perfect start at Molineux as Nani fired home a left-foot shot in just the third minute.

But Wolves leveled seven minutes later as fullback George Elokobi, who gave the Portugal winger far too much time and space in the penalty area, made amends with a header from Matt Jarvis' cross.

The Cameroon-born defender was also involved in the winner, credited to striker Kevin Doyle, after the duo lunged to meet a free-kick by Serbian playmaker Nenad Milijas five minutes before halftime.

United's much-vaunted forward line of Wayne Rooney and Dimitar Berbatov could not breach the Wolves defense, with the Bulgarian replaced by Javier Hernandez with a similar outcome despite five minutes of time being added on.

The visitors could have ended the match with 10 men, but veteran midfielder Ryan Giggs was lucky to stay on after kicking out at Doyle.

"It's disappointing, it's been a long run for us," United manager Alex Ferguson told reporters after his team's first loss in 29 league games going back to last season.

"But we didn't get going really in the second half today. Wolves are a handful at set-pieces and they proved that again today."

Arsenal led 4-0 at 10th-placed Newcastle, but had to settle for a draw after French midfielder Abou Diaby was sent off soon after the halftime break.

England forward Theo Walcott and Johan Djourou scored inside three minutes, then a double from Dutch striker Robin van Persie on 10 and 26 gave the London side an apparently insurmountable lead.

But Joey Barton -- who was at the center of Diaby's dismissal -- reduced the deficit in the 68th minute with a penalty and the midfielder added another on 83 for 4-3 after striker Leon Best bundled in Jose Enrique's cross (75).

Ivory Coast midfielder Cheik Tiote then volleyed a spectacular equalizer with two minutes to play, and Arsenal held on with another five added on.

Manchester City won for the first time in four matches as Tevez celebrated his 27th birthday with three goals in 19 minutes at home to West Brom, two of them from the penalty spot.

The Argentina forward is now the league's second-highest scorer on 18, one behind Berbatov, and City have not lost in a game when he has netted.

His first was a penalty in the 17th minute, having earlier hit the post, while David Silva set up his second before West Brom went further behind following handball by Jerome Thomas. The result left Roberto Di Matteo's team just two points above the bottom three.

Tottenham went ahead with Rafael van der Vaart's sixth-minute penalty at home to Bolton, and should have doubled the lead soon after but the Dutchman was made to retake his second spotkick and promptly missed the target for what would have been his 13th goal this season.

Referee Mark Clattenburg awarded Spurs another penalty before halftime before realizing that Peter Crouch had been flagged offside.

Ghana striker Asamoah Gyan had given the visitors the lead with his ninth goal this season, but Huth netted from Jermaine Pennant free-kicks with seven minutes to play and then in time added on.

Wigan joined West Brom on 26 points after holding on at home to 11th-placed Blackburn, with James McCarthy scoring twice.

Ben Watson's penalty made it 4-2 before David Dunn replied in kind with nine minutes left to set up a tense finish.

Everton moved up to 13th place as Saha's four-goal salvo condemned Blackpool to a seventh defeat in eight league matches.

The 32-year-old former France international leveled the game at 3-3 with his hat-trick, then sealed victory after Jermaine Beckford's spectacular volley.

Fulham remained above Everton on goal difference after the London side continued to improve under Mark Hughes with a 2-2 draw at Aston Villa that left their opponents a point ahead of Blackpool in 14th.

American Clint Dempsey earned the point with his 10th goal this season with 12 minutes to play, after on-loan defender Kyle Walker put Villa ahead from long range.