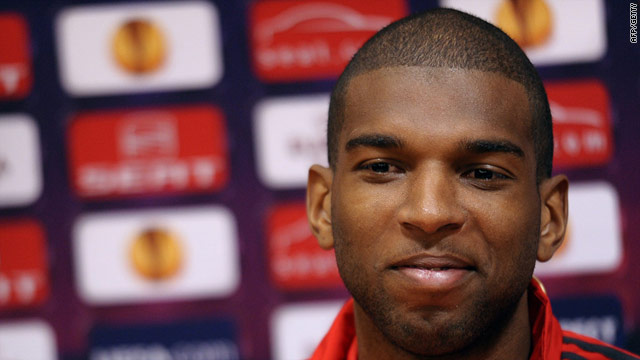 Ryan Babel's comments about referee Howard Webb on Twitter landed him in hot water with the FA.
STORY HIGHLIGHTS

(CNN) -- English Premier League stars have been warned about making controversial comments on Twitter and through other social media.

The English Football Association (FA) outlined its policy Sunday, ruling that tweets, blogs and entries on Facebook were in the public domain and that players should exercise caution.

The FA's stance follows its decision to fine former Liverpool forward Ryan Babel in January for comments made about referee Howard Webb on Twitter, where he posted a mock-up picture of the official in a Manchester United shirt.

Arsenal's Jack Wilshere also nearly landed in hot water after complaining of "inconsistent refereeing" as his side threw away a four-goal lead at Newcastle last weekend.

The FA made it clear it would not tolerate such comments in a statement on its official website Sunday:

Comments which are deemed improper, bring the game into disrepute, or are threatening, abusive, indecent or insulting may lead to disciplinary action
--FA statement
RELATED TOPICS

"The FA has issued clarification to participants relating to the use of social networking sites, including, but not limited to Twitter, Facebook and internet blogs," it read.

"Any comments which are deemed improper, bring the game into disrepute, or are threatening, abusive, indecent or insulting may lead to disciplinary action."

Players were also warned that while they believed their postings may be limited to a small number of people, they might still end up with a wider audience.

"Consequently, care should be exercised with regards to the contents of such postings," added the statement.

"In addition, we would remind participants that social networking postings could also lead to civil proceedings being brought by affected parties."