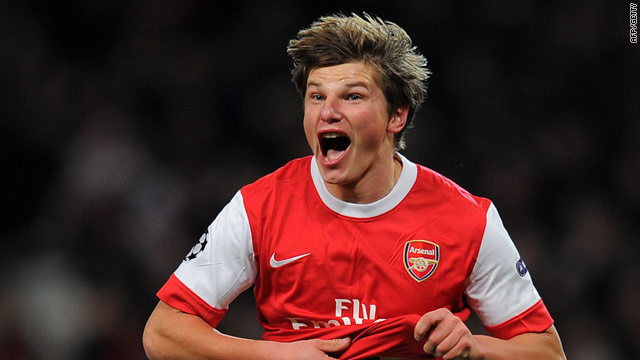 Andrey Arshavin celebrates his winning goal at the Emirates in the 2-1 victory over Barcelona.
STORY HIGHLIGHTS

Barcelona led through a 26th minute goal from David Villa and might have added to their tally as Lionel Messi endured a frustrating night.

But Dutch international van Persie, who had threatened to score in the first half, latched on to a pass from Gael Clichy and beat Victor Valdes at his near post for a 78th minute equalizer.

Arshavin capped a dream comeback for Arsene Wenger's men with a curling shot past Valdes five minutes later after the ball had been perfectly laid into his path by Samir Nasri.

Messi, who missed a gilt-edged opening early in the first half, was crowded out by desperate Arsenal defense as Barca pushed for an equalizer, but to no avail.

"We suffered for some spells in the game but never gave up," he added.

His Barcelona counterpart Pep Guardiola believes his men will emerge on top after the second leg on their home ground.

"I think we more or less controlled the game and we just need to create the chances we did tonight in the Nou Camp and then take them.

"It will be an open game I am sure. Yes we have lost tonight, but we still have the second leg," he said.

Guardiola may well have been referring to his talisman Messi, who burst through with a typical run after a bright opening by the home side.

Van Persie had seen his volleyed effort saved by Valdes and came within a whisker of heading home a Cesc Fabregas cross, only for Eric Abidal to make a timely interception.

But in the next attack, Barcelona were ahead as Messi played in Villa to score neatly.

A Messi header was disallowed for a marginal offside decision and he shot into the side netting after another typical burst into the penalty area, but Arsenal were also a threat going forward in an open game.

The prolific Van Persie scored his 13th goal of an injury-truncated season and Arshavin's winner, after a flowing Arsenal move reminiscent of Barcelona at their best, capped a memorable night for the Gunners.

In Wednesday's other Champions League action, Ukraine's Shakhtar Donetsk scored a 3-2 win over AS Roma in the Italian capital to take a firm grip on the last 16 tie.

Simone Perrotta put Roma ahead but then Brazilian trio Jadson, Douglas Costa and Luiz Adriano all scored for Shakhtar in a 12-minute spell.

Jeremy Menez's second half goal gave Roma some late hope for the return tie, but they were jeered off by their fans.