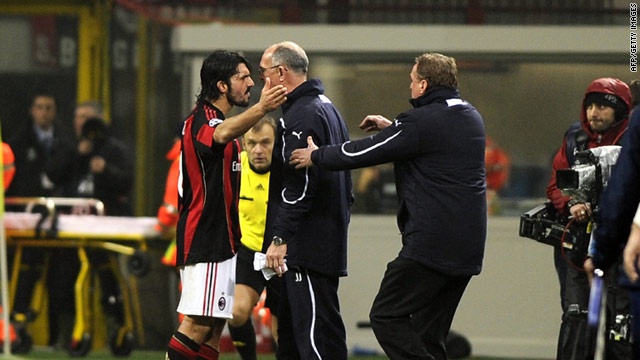 Gattuso had already had an altercation with 59-year-old Jordan, who ironically starred for Milan during his playing career, earlier in Tottenham's 1-0 win, before the two went head-to-head again at the final whistle.

Speaking to the media following Milan's defeat, Gattuso said: "I lost my head and I'm taking responsibility because I did something I shouldn't have done.

Why Gattuso has to lose his cool

"I was annoyed about the words I'd exchanged with Jordan earlier. We were both speaking Scottish given that I played in his country in Glasgow but I'm not going to say what was said.

"I made a mistake doing what I did to an older person, and that's it. I will wait and see what UEFA decides now," he added.

And European football's governing body UEFA have already issued a statement saying: "UEFA has opened disciplinary proceedings against Gennaro Gattuso after the incidents that took place after the match between AC Milan and Tottenham.

"The UEFA Control and Disciplinary Body will meet next Monday February 21 to discuss this case."

Gattuso's behavior drew widespread condemnation, with his own coach Massimiliano Allegri expecting his player to be disciplined.

Allegri told a press conference: "It was an unpleasant episode, I really don't know why it happened."

"I didn't like this episode, it's not nice to see, of course it will be looked at by UEFA, there was certainly a reason that he behaved this way but you can't excuse it."

Tottenham manager Harry Redknapp added: "Gattuso had a flair-up with Joe Jordan. I don't know why. He obviously hasn't done his homework. He really could have picked a fight with someone other than Joe.

"He put his head into Joe's face for some reason. It was crazy. He lost his head during the game."