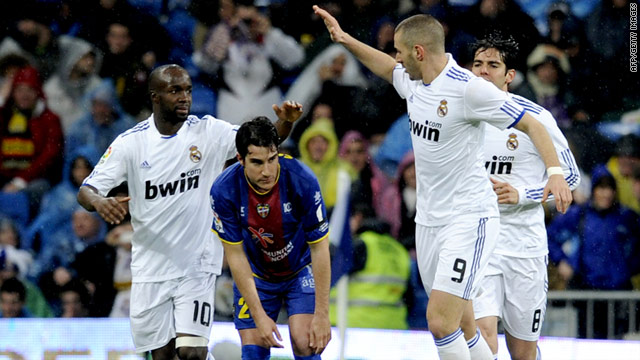 First-half goals from Karim Benzema and Ricardo Carvalho were enough to give Mourinho's team a 19th victory in 24 La Liga games this season.

The victory extended Real's unbeaten home La Liga run under Mourinho to 12 matches -- now 148 in total since his only career home league defeat when in charge of Porto on February 23, 2002.

Mourinho has carried his incredible record through spells with English club Chelsea and European champions Inter Milan into his first season at the Santiago Bernabeu.

I liked that my team played a serious match. These games ahead of Champions League matches can be complicated
--Jose Mourinho
RELATED TOPICS

Spanish titleholders Barcelona will seek to bounce back from Tuesday's Champions League defeat by Arsenal and last weekend's surprise draw with Sporting Gijon when Athletic Bilbao visit the Camp Nou on Sunday.

Lyon warm up for Real clash with win

The 23-year-old has been vying for a place with loan signing Emmanuel Adebayor in the absence of the injured Gonzalo Higuain, and he scored his third league goal this season from close range after a superb run down the right by winger Angel Di Maria.

Real dominated after that sixth-minute opener, and the second goal came four minutes before halftime when veteran Portugal defender Carvalho diverted in a vicious Cristiano Ronaldo free-kick for his third La Liga goal since leaving Chelsea in August.

Second-half substitute Adebayor thought he had made it 3-0 in time added on, but Ronaldo was ruled to have been offside as he sought to pounce on a blocked shot from another replacement, Mesut Ozil.

"I liked that my team played a serious match. These games ahead of Champions League matches can be complicated because players may focus more on the European competition," Mourinho told reporters.

"The team played well and was very focused. We knew Levante would make it tough. They were organized in defense, but we scored early and had things under control. Winning and resting players is what mattered."

The defeat left Levante two points above the bottom three, with the Valencia-based team hoping to avoid an immediate return to the second division.

Third-placed Valencia lost ground on Madrid following a 0-0 draw at home to Sporting Gijon, who ended the day above 16th-placed Levante on goal difference.

That result means fellow Champions League hopefuls Villarreal can draw level on 48 points with a win at home to bottom club Malaga on Sunday.

The Argentine striker broke the deadlock with a flash of brilliance in the 65th minute as he received Diego Forlan's pass, burst into the penalty box and fired a low shot across the keeper and into the far corner.

Zaragoza could have snatched a point, but Nigerian striker Ikechukwu Uche and on-loan Argentine midfielder Nicolas Bertolo both saw late efforts rebound off the Madrid crossbar.

Zaragoza remained a point above third-bottom Osasuna, who host sixth-placed Espanyol on Sunday.