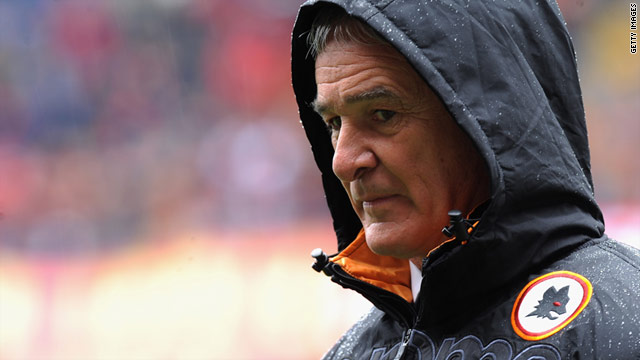 Roma coach Claudio Ranieri has stepped down from his position after the Serie A side's 4-3 defeat at Genoa on Sunday.
STORY HIGHLIGHTS
RELATED TOPICS

(CNN) -- Claudio Ranieri has resigned as AS Roma coach following the Italian Serie A side blew a three-goal lead to lose 4-3 at Genoa on Sunday.

The result marked a fourth consecutive defeat for the Rome-based club, who also lost to Ukrainian team Shakhtar Donetsk in the Champions League earlier this week.

After much speculation about Ranieri's future, AFP reported that the 59-year-old had told Italian news agency Ansa that he had quit.

"I've always thought about the good of Roma and after a game such as today's I believe it's right to give a signal. After the final whistle I went into the changing rooms to thank the team and I decided to hand in my resignation," the Italian reportedly said.

The day had started brightly for Ranieri as he saw his team go 3-0 up within 51 minutes thanks to goals from Philippe Mexes, Nicolas Burdisso and skipper Francesco Totti.

But things soon took a turn for the worst as Genoa staged a remarkable comeback scoring four goals in in 35 minutes to seal Ranieri's fate.

The former Chelsea boss, who had been in charge at Roma since 2009, leaves the side in eighth place in Serie A, trailing league leaders AC Milan by 13 points and city rivals Lazio by four.

Roma's president Rosella Sensi says that the club will make a decision on the coaching situation on Monday, according to AFP.

Meanwhile, a late goal from substitute Alexandre Pato ensured AC Milan maintained their lead at the top of the Italian league with a 2-1 win at 10-man Chievo Verona.

Brazil striker Robinho gave Massimiliano Allegri's side the lead after 25 minutes, before Switzerland's Gelson Fernandes equalized for mid-table Chievo when play resumed in the second half.

Brazil's Pato then came off the bench to score the winner, just before Chievo's Slovenian defender Bostjan Cesar was given a red card for a second-bookable offence with six minutes left to play.

Defending champions Inter had moved within two points of the league leaders on Saturday following victory over Cagliari, but Milan's triumph means they now have five-point cushion over their third-placed city rivals.

Napoli reclaimed second place with a 1-0 win at home to Catania, the club's fourth league victory in five matches.

Colombia international Juan Camilo Zuniga scored the only goal in the 25th minute to put Napoli three points off the lead, while Catania are the same distance from the relegation zone.

Fourth-placed Lazio beat bottom-of-the-table Bari 1-0 at home at Rome's Stadio Olimpico thanks to an early goal from Brazilian midfielder Hernanes.

Lecce kept their hopes of survival alive with a 2-0 win at home over Champions League qualification contenders Juventus, who had goalkeeper Gianluigi Buffon was sent off for a deliberate handball after just 12 minutes.

Djamel Mesbah scored for Lecce in the first half before Andrea Bertolacci doubled the lead early in the second.

Parma came from behind to salvage a 2-2 draw at home to second-from-bottom Cesena thanks to a penalty from Hernan Crespo and a late strike from substitute Rafaelle Palladino.

Fifth-placed Udinese's Champions League ambitions suffered a setback as they had to settle for a 0-0 draw at home with lowly Brescia, while the game between Fiorentina and Sampdoria also finished in stalemate.