Glazers: Manchester United not for sale 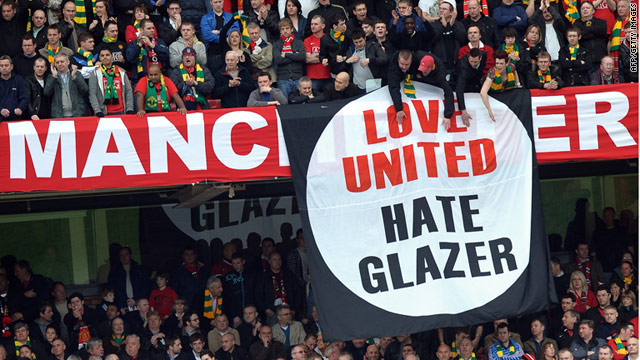 The Glazers have been unpopular with some Manchester United fans since taking over the club in 2005.
STORY HIGHLIGHTS
RELATED TOPICS

(CNN) -- Manchester United's American owners have again insisted that the English club is not for sale, releasing a short statement while announcing second-quarter financial results on Friday.

British media have renewed speculation that Qatar's royal family will make an offer of a reported £1.8 billion ($2.9 billion) for a club that U.S. billionaire Malcolm Glazer and his family bought in 2005 at an overall value of £800 million.

"The board notes recent press speculation regarding a possible bid for Manchester United," the statement said. "The owners remain fully committed to their long-term ownership of the club.

"No discussions have taken place, Manchester United is not for sale and the owners will not entertain any offers."

The Glazers have been criticized by United fans after it was revealed that their takeover involved a £660 million debt in finance leveraging, which they have been paying off with club revenue since.

While domestic matchday income for the period dropped slightly from £33.1 million to £32.8 million, and media revenue stayed similar, commercial turnover including overseas merchandising climbed from £19.2 million ($31 million) to £25.5 million ($41 million).