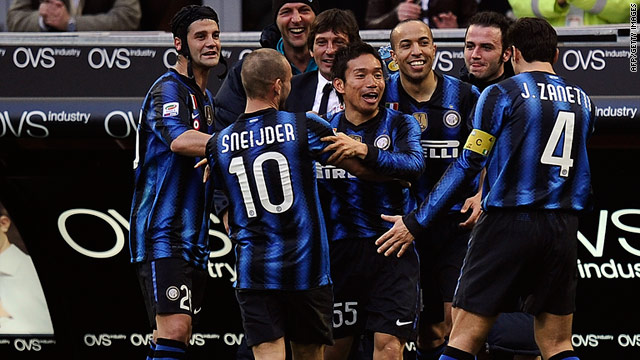 (CNN) -- Inter Milan are once again five points behind rivals AC Milan at the top of the Italian Serie A table after crushing Genoa 5-2 at the San Siro on Sunday.

But the defending champions had to come from behind to claim the three points, Genoa leading 1-0 at the break after Rodrigo Palacio fired home following good work from Abdoulay Konko.

However, Inter were a different side in the second-half and three goals in seven minutes completely turned the match around.

The home side leveled in the 50th minute when Giampaolo Mazzini slotted home Maicon's cross and they took the lead a minute later when Samuel Eto'o converted a rebound after Goran Pandev's shot was fumbled by goalkeeper Eduardo.

And Eto'o added his second goal just six minutes later with a superb individual effort, the Cameroon striker's 18th goal of the season.

Goran Pandev made it 4-1 in the 68th minute, after being set-up by Eto'o and Wesley Sneijder, and Yuto Nagatomo netted his first goal for the club to complete the scoring.

Meanwhile, third-placed Napoli lost more ground on the top two after being held to a goalless draw by lowly Brescia at the San Paolo, with coach Walter Mazzarri sent to the stands in the first half for arguing with the referee.

The Naples side are now eight points off the top and just two points ahead of fourth placed Lazio, who saw off Palermo 2-0 thanks to an early double from Giuseppe Sculli.

Ever-improving Udinese are just a point behind Lazio in fifth place after a 1-0 win over bottom side Bari courtesy of Antonio Di Natale's second-half penalty, his 22nd goal of the season.

In other matches, Adrian Mutu scored twice to help Fiorentina to a comfortable 3-0 win over Catania, while an injury time goal from Gaston Ramirez helped Bologna to a 2-2 draw against Cagliari.

On Saturday, Gennaro Gattuso scored the only goal as table-toppers Milan saw off struggling Juventus 1-0, the Rossoneri's seventh win of 2011.

In Sunday's two German Bundesliga games, Mainz claimed a superb 4-2 victory at Hamburg to move above defending champions Bayern Munich into fourth place in the table.

Meanwhile, struggling Werder Bremen moved out of the bottom three with a vital 3-1 win at Freiburg.