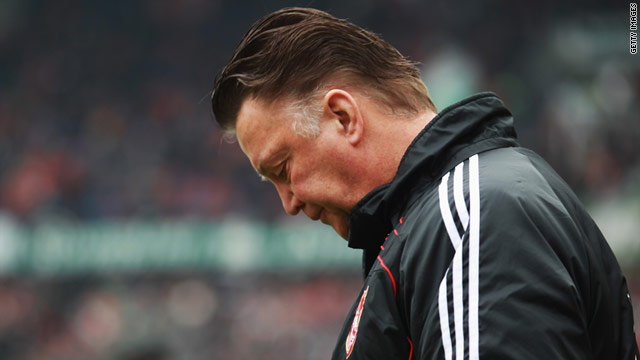 Louis van Gaal will not be at Bayern next season after the German giants confirmed the Dutchman's departure.
STORY HIGHLIGHTS

(CNN) -- German Bundesliga champions Bayern Munich have confirmed that coach Louis van Gaal will be leaving the club at the end of the season.

Van Gaal led Bayern to a domestic double -- and the final of the Champions League -- last season, but this campaign their fortunes have taken a nosedive.

Last week they were knocked out of the German Cup at the semifinal stage by Schalke, while Saturday's 3-1 defeat at Hanover, their third loss in a row, leaves them lying in fifth place in the table, seven points adrift of the second place that would guarantee them Champions League football next season.

However, Bayern do still remain in this season's Champions League and lead defending champions Inter Milan 1-0 going into next week's second leg in Germany.

The reason for the contract being annulled is differing views on the club's strategic direction.
--Bayern Munich statement
RELATED TOPICS

The 59-year-old van Gaal was on a contract until June 2012, but the Bavarian giants have revealed the deal is being terminated a year early.

A statement on the club's official website said: "The reason for the contract being annulled is differing views on the club's strategic direction."

Former Dutch national coach van Gaal has also been in charge of Barcelona (twice), Ajax and AZ Alkmaar in a glittering career.

However, he is a controversial and outspoken character that can divide opinion and last weekend's reverse, which leaves Bayern a massive 19 points behind leaders Borussia Dortmund, appears to have been the final straw for the club's board.

Turkey coach and former Chelsea manager Guus Hiddink, former Ajax, Hamburg and Tottenham coach Martin Jol, Bayer Leverkusen's Jupp Heynckes and Matthias Sammer, currently director of sport at the German Football Federation, have all been mentioned as possible successors at the end of the season.