Veh sacked by Hamburg after thrashing 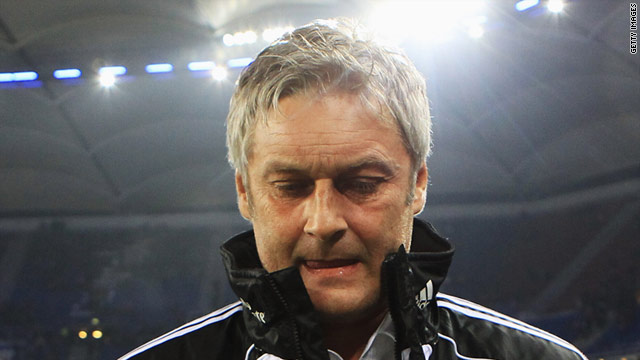 The defeat, following the previous weekend's 4-2 home loss to Mainz, cost Veh his job with immediate effect, despite Hamburg lying eighth in the table and still in with a chance of qualifying for the Europa League next season.

Earlier in the week, Veh had announced that he was planning to leave in May, blaming internal problems at the club for his decision.

However, the defeat by Bayern brought his departure forward, meaning assistant coach Michael Oenning takes over in temporary charge for the rest of ths season.

In a statement, Hamburg director of sport Bastian Reinhardt said: "After announcing he will leave at the end of the season, and in light of the results from our last two games, we have decided to cut our ties and part company with Armin Veh."

The 50-year-old Veh, who guided Stuttgart to the Bundesliga title in 2007, only joined Hamburg at the end of last season and had a contract running until May 2012.

Meanwhile, Borussia Dortmund's lead at the top of the Bundesliga table has been reduced to nine points after second-placed Bayer Leverkusen claimed a late 1-0 win at Mainz.

Despite their shock defeat at Hoffenheim on Saturday, Dortmund remain well placed to win the title with just eight matches still to play.

Hanover are another five points behind in third place, a massive 14 points off the pace, while champions Bayern are fourth, 16 points behind Dortmund.

The day's other match saw Stuttgart secure a vital 2-1 win at St Pauli in a tight match between two teams in relegation trouble.

That result puts both clubs on 28 points, along with Kaiserslautern and Eintracht Frankfurt, but St Pauli are in the bottom three on goal difference with Wolfsburg and Borussia Moenchengladbach in possession of the bottom two places.