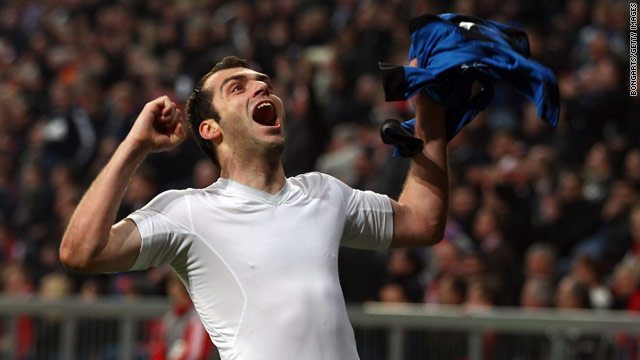 With four minutes left at Munich's Allianz Arena, holders Inter looked like they were crashing out of the competition.

Despite taking an early lead through Samuel Eto'o, goals from Thomas Muller and Mario Gomez had put Bayern back in control.

But a superb Wesley Sneijder strike leveled the tie 2-2 on the night, yet Inter still trailed 3-2 on aggregate thanks to Bayern's 1-0 victory in Milan three weeks previously.

With the clock ticking down, Samuel Eto'o slalomed through Bayern's defense, squaring for Pandev who shot powerfully into the top left hand corner, leveling the tie 3-3 on aggregate and sending Inter through on away goals.

We didn't finish our chances to counter-attack, we could have led 4-1 or 5-1
--Bayern's Mario Gomez

"We have played too passively and made too many mistakes at the end," Bayern striker Mario Gomez told AFP.

"We didn't finish our chances to counter-attack, we could have led 4-1 or 5-1 if we had. You can't do something like that against a team like that without being punished."

In the other Champions League match, Manchester United overcame French side Marseille 2-1.

After holding the Red Devils to an impressive 0-0 draw at the Stade Velodrome in the first leg, Marseille rarely looked like scoring at Old Trafford following some wayward finishing, with French international Andre-Pierre Gignac and Souleymane Diawara particularly profligate.

But profligacy was not a problem for Manchester United's Mexican striker Javier Hernandez who scored twice, taking his goal tally to 16 this season in all competitions.

A late Wes Brown own goal gave Marseille some hope, but Manchester United held on to a deserved victory.

"Our experience saw us through in the end, I think, and it was a good result, for sure," Manchester United's coach Alex Ferguson told Sky Sports. The victory was Ferguson's 100 in the Champions League.

Wednesday night sees Lyon visit Jose Mourinho's Real Madrid, and FC Copenhagen travel to London to take on Chelsea in the final two matches of the round.