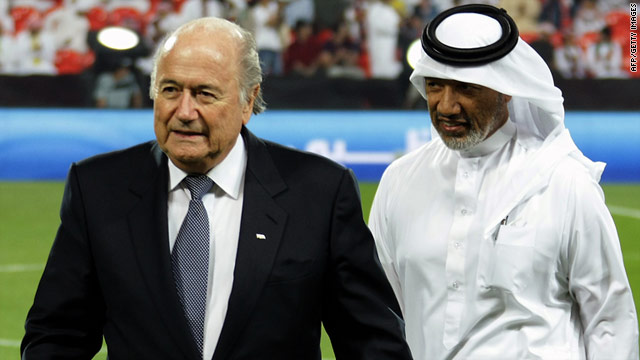 (CNN) -- Mohammed Bin Hammam has promised to reform FIFA's corruption-tainted top echelons if he is successful in ending the 13-year reign of its president Sepp Blatter in the June 1 elections.

The head of the Asian Football Confederation threw his name into the hat on Friday to end the prospect of the 75-year-old Blatter being re-elected unopposed.

"I will always put in mind and consider among other things ... the demands from the public to keep FIFA and football organizations above accusations and suspicion of negative practice," Bin Hammam told reporters on Friday.

"I will always put into consideration the need of economically-underprivileged member associations to have more technical and financial support to enable them to close the gap between their nations and those of the advanced football nations."

The last time Blatter faced a battle was in 2002, when he defeated Africa's Issa Hayatou by 139 votes to 56 despite his campaign being run amid claims of corruption and financial mismanagement.

FIFA's 24-man executive committee has again been mired in controversy, with two of its members suspended last November ahead of the decision on which countries would host the 2018 and 2022 World Cups, following an investigation into alleged bribery for votes.

Bin Hammam, in his third term as AFC president, said he will replace that committee with an expanded 41-member FIFA Board if he is elected, giving more representation to the world's regional confederations.

"A new executive committee will be coming, 40 members plus the president is 41, and it will avoid as much as possible for the privilege of the casting vote going to the president."

Bin Hammam said he would also create a new "executive office" headed by the FIFA president and the six confederation leaders to implement the board's decisions.

"I will decentralize the activities of the FIFA administration. The legal matters, like the statutes and international transfers, and statutory issues can be handled directly by the confederations under the supervision of their executive bodies," he said.

He also vowed to make football's governing body more transparent, with a new proactive body to replace the existing Ethical Committee, which presently rules only after acts have happened.

Bin Hammam will face a difficult task to convince FIFA's 208 member nations that he should replace Blatter, who has presided over a $1.28 billion profit following the success of the 2010 World Cup in South Africa.

Blatter's committee awarded Qatar the 2022 tournament despite serious concerns over the emirate's infrastructure and intensely-hot weather, while Russia was a surprise winner of the right to host in 2018.