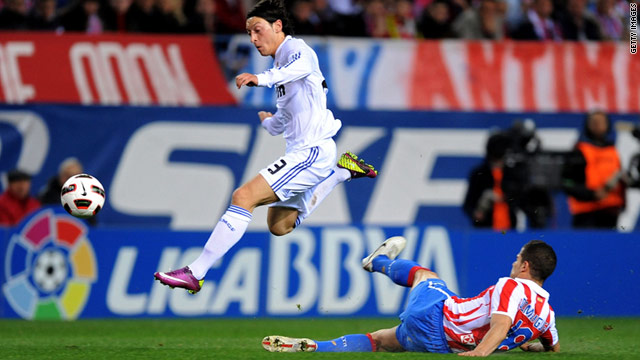 (CNN) -- Real Madrid kept the pressure on Spanish leaders Barcelona with a 2-1 victory in the capital derby against Atletico on Saturday.

Barcelona earlier defeated Getafe by the same scoreline to move eight points clear at the top, but Jose Mourinho's men responded by beating Atletico for the fourth time this season.

Karim Benzema continued his recent hot scoring run to put Real ahead in the 11th minute at the Vicente Calderon, with the France forward netting for the eighth time in five games after a clever stabbed pass from Sami Khedira.

Khedira's fellow Germany midfielder Mesut Ozil made it 2-0 in the 32nd minute with his sixth La Liga goal this season, sidefooting a powerful left-foot effort from Marcelino's left-wing cutback that Atletico keeper David de Gea could only help into the net.

The lead at times flattered Real, who needed a string of fine saves from goalkeeper Iker Casillas to keep Atletico at bay.

Striker Sergio Aguero finally scored a deserved goal in the 86th minute after a well-worked one-two with Koke inside the penalty area, but Atletico did not seriously threaten again in the three minutes of time added on.

It capped a fine week for Mourinho, who guided Real into the quarterfinals of the European Champions League for the first time since 2004, with a tie against England's Tottenham awaiting.

Barcelona are also through to the last eight of that competition, facing Ukraine's Shakhtar Donetsk with the winner to play either Real or Spurs in the semis.

Pep Guardiola's team went into the home match against Getafe without veteran French defender Eric Abidal, who had an operation to remove a liver tumor last Thursday, plus captain Carles Puyol, winger Pedro and Maxwell.

But with the likes of Lionel Messi and David Villa in the line-up, the Catalans always had too much firepower against a team which has slumped out of European qualification contention.

That star duo did not add to their formidable goal tally this season, as Brazil fullback Dani Alves broke the deadlock in the 17th minute with a fierce half-volley from outside the penalty area.

Villa was booked for diving before halftime, then Messi helped 20-year-old Bojan Krkic make it 2-0 four minutes after the break with a low shot that took a huge deflection.

It was Krkic's 100th La Liga outing for Barcelona, and featured his second successive goal and sixth of the campaign.

With Barca coasting, Getafe gave the home fans a late scare when Manu del Moral volleyed home a cross in the 87th minute.

In Saturday's other game, Real Mallorca moved up to ninth place with a 1-0 win at home to Real Zaragoza, who remained four points above the bottom three.

In Saturday's other game, Lazio moved back into fourth place with a 1-0 win at home to struggling Cesena thanks to a second-minute goal from striker Mauro Zarate.