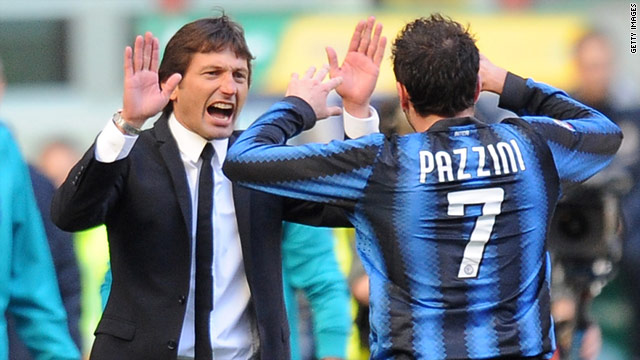 (CNN) -- Inter Milan capitalized on AC Milan's slip-up to move within two points of their city rivals after a controversial 1-0 win at home to lowly Lecce on Sunday.

Leaders Milan suffered a shock 1-0 defeat at Palermo on Saturday, giving Inter hope of a sixth successive title with eight rounds left to play this season ahead of the derby at the San Siro on April 2.

However, both teams also face a challenge from Napoli who could move within three points of the leaders with a win over Cagliari in Sunday's late match.

The remainder of the first half was peppered with controversial incidents, with Lecce's Uruguayan midfielder Guillermo Giacomazzi yellow-carded for his kick on Samuel Eto'o, then Inter defender Lucio was booked for a handball that means he is suspended for the Milan derby in two weeks.

Inter striker Giampaolo Pazzini and Lecce's Brazilian defender Fabiano had to be broken up by referee Daniele Orsato when the pair came to blows.

The second half started just as bizarrely, as a mistake from Lecce goalkeeper Antonio Rosati almost gifted Inter with an unlikely goal.

As it was, Inter's 54th-minute winner from Pazzini was hotly-disputed by the Lecce players, who claimed it had come off the Italy forward's hand.

"Today I can say that we're where we wanted to be and the derby won't be decisive, even if we win, because we'll only have a one-point lead," Inter coach Leonardo told the club's website.

"Let's not forget that Napoli and Udinese have been on great runs for a long time.

Champions League hopefuls Udinese moved ahead of Napoli and Lazio into third place in the table after defeating Catania 2-0.

Gokhan Inler opened proceedings for the home side in the 22nd minute, while captain Antonio di Natale doubled the lead with a penalty in the 74th minute after Alexis Sanchez was brought down by Giuseppe Marchese.

Sixth-placed AS Roma twice came from behind to secure a 2-2 draw at Fiorentina, as captain Francesco Totti bagged his second successive double to pass 200 career goals in Serie A.

Romania striker Adrian Mutu put Fiorentina ahead before Totti reached the landmark with a penalty, but defender Alessandro Gamberini made it 2-1 at halftime.

Totti, whose brace secured Roma victory in the in the Eternal City derby against Lazio last weekend, earned his team a point seven minutes after halftime from John Arne Riise's cross.

Juventus moved into seventh place ahead of Palermo after defeating second-bottom Brescia 2-1.

Milos Krasic scored in the 25th minute for Juve, but Eder leveled the match just before halftime.

Veteran striker Alessandro del Piero tied up three points for the home side in the 68th minute, while Victor Mareco's sending-off left Brescia with just 10 men for the last 20 minutes.

Sergio Pellissier put Chievo ahead after 38 minutes only for the home side to be awarded a penalty two minutes later, allowing Abdelkhader Ghezzal to equalize. Davide Moscardelli scored the winner for the visitors four minutes after halftime.

Parma moved four points clear of the bottom three with a 1-0 win at Sampdoria, thanks to Cristian Zaccardo's 65th-minute goal.

Sampdoria had a chance to level the game with a penalty 10 minutes later, but striker Massimo Maccarone was unsuccessful as his team were left two points above the relegation zone.

Mid-table rivals Bologna and Genoa settled for a 1-1 draw, with striker Marco Di Vaio opening the scoring for the former after 28 minutes and defender Dario Dainelli equalizing just before halftime.