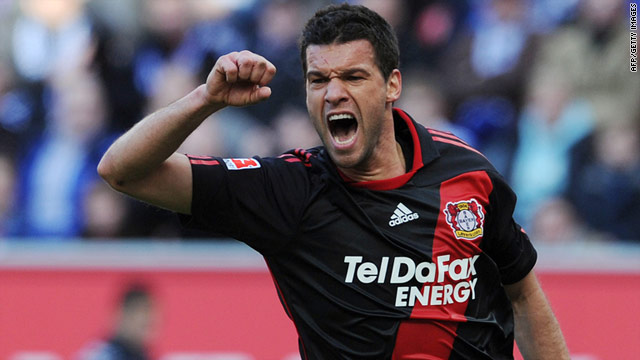 (CNN) -- Bayer Leverkusen reduced Borussia Dortmund's Bundesliga lead to seven points with a 2-0 win over Schalke on Sunday, while Stuttgart denied Felix Magath a winning return as coach of Wolfsburg.

Schalke had Seppo Eichkorn in the dugout before Ralf Rangnick takes over as Magath's replacement, but the European Champions League quarterfinalists' poor domestic form continued as second-placed Leverkusen capitalized on Dortmund's 1-1 draw with Mainz on Saturday.

The defeat left Schalke, last season's runners-up under Magath, in 10th place -- 29 points behind Dortmund with seven rounds to play.

Leverkusen coach Jupp Heynckes, who has been linked with a third stint at ailing defending champions Bayern Munich, told reporters after the match that he would make a decision on his future on Monday.

"I'll talk with the bosses on Monday after training and I hope to make public my decision soon after," the 65-year-old said in quotes reported by AFP.

Magath led Wolfsburg to the 2009 German title before switching to Schalke, but his first match since his dismissal last week ended in a 1-1 draw at fellow strugglers Stuttgart.

Brazilian striker Grafite put second-bottom Wolfsburg ahead five minutes before halftime as he held off Georg Niedermeier, but the defender had the final word with an equalizer four minutes into time added at the end of the second spell after desperate long ball forward.

The draw lifted Stuttgart a point above third-bottom side St. Pauli.