Bayern Munich confirm Heynckes as new coach from next season 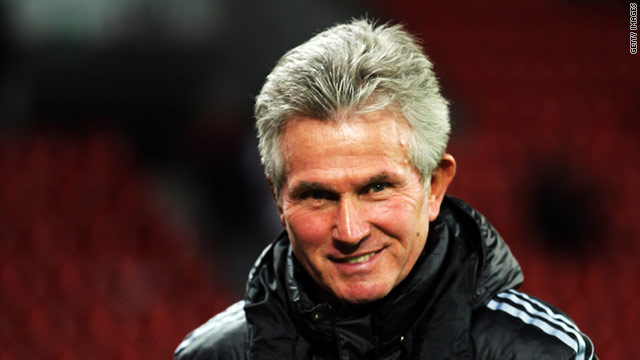 Heynckes will take over as Bayern Munich coach for a third time from July 1.
STORY HIGHLIGHTS

(CNN) -- German Bundesliga champions Bayern Munich have confirmed that Jupp Heynckes will return as coach for a third time from next season.

The 65-year-old Heynckes was widely expected to take over from Louis van Gaal after recently confirming that he was leaving Bayer Leverkusen at the end of this season, but Bayern made the news official on Friday.

Confirming that Heynckes will take charge of Bayern from July 1, chairman Karl -Heinz Rummenigge told their official website: "Jupp Heynckes was the candidate we wanted.

"We are delighted we've reached agreement with him on a two-year contract. I'm convinced our partnership with Jupp Heynckes will be a successful one."

Heynckes, who has led Leverkusen to second place in the Bundesliga this season, added: "Quite apart from my excellent personal relations with the senior officials at Bayern, I have always been exceptionally impressed by the utterly professional way in which the club is managed.

I have already coached Bayern twice, and always valued the working atmosphere and climate there
--Jupp Heynckes
RELATED TOPICS

"I have already coached Bayern twice, and always valued the working atmosphere and climate there.

"Obviously, as Bayern coach, you have a certain duty to deliver success. However, I regard that as an appealing challenge, which I am delighted to tackle together with the team over the next two seasons."

Heynckes has 32 years of coaching experience, taking his first job at Moenchengladbach in 1979.

He led Bayern to two league titles in his first spell at the club between 1987 and 1991 and also briefly replaced Jurgen Klinsmann in 2009.

Schalke and Eintracht Frankfurt have also been coached by Heynckes in his home country, while he has also been in charge of Real Madrid, Benfica, Tenerife and Athletic Bilbao (twice).