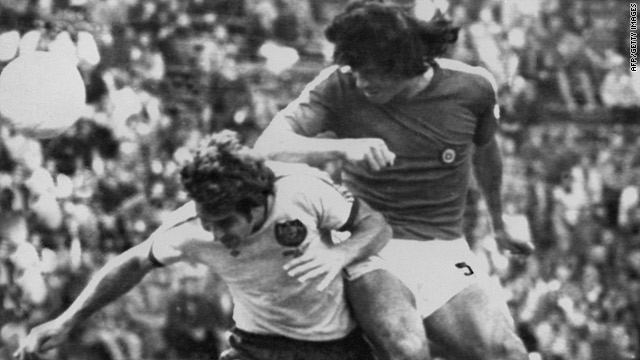 Figueroa (right) was an imposing central defender for Chile during the 1960s and 1970s.
STORY HIGHLIGHTS
RELATED TOPICS

(CNN) -- Chilean football legend Elias Figueroa will not be challenging Sepp Blatter for the presidency of world football's governing body FIFA this year.

The 64-year-old had stated his intention to challenge for soccer's top job in elections on June 1 but has now pulled out of the race saying there wasn't enough time to put together a credible bid.

As things stand currently that leaves Qatar's Mohammed Bin Hammam -- leader of the Asian Football Confederation -- as the only challenger to Blatter.

Figueroa said in a statement: "I have decided not to accept...for the sole reason that I'm sure with such a short time in which to state a case I could not prepare one worthy of the magnitude and importance of such a distinguished job."

The three-time South American player of the year had revealed he was the preferred candidate for an organization called Change FIFA but was struggling to attract support from any of the 208 member countries.

Change FIFA is a campaign that has been courting federations for a presidency nomination, although it is believed they will need to raise funds of $500,000 for a two-month campaign.

Blatter has already confirmed that he will seek re-election for one more four-year term before retiring in 2015.

Meanwhile, Blatter has revealed he believes goalline technology will be in place in time for the 2014 World Cup finals in Brazil.

The Swiss made the claims in an exclusive interview with French television channel TF1.