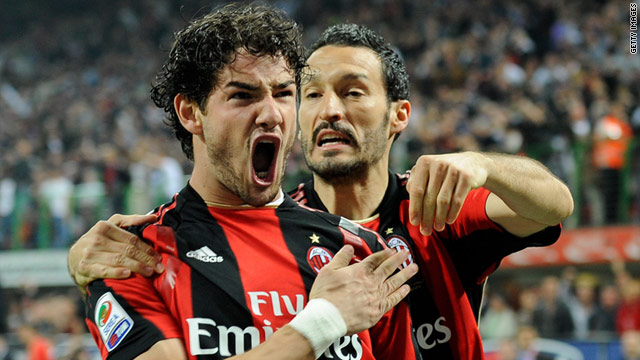 Alexandre Pato, left, was a key figure as the Italian leaders defeated Inter for the second time this season.
STORY HIGHLIGHTS
RELATED TOPICS

(CNN) -- AC Milan took a giant step toward wresting the Italian Serie A title off Internazionale after Alexandre Pato scored twice in Saturday's 3-0 derby victory at the San Siro, which ended with both teams reduced to 10 men.

Inter's reign stretches back to the 2005-06 season, but the second-placed Nerazzurri -- coached by former Milan boss Leonardo -- now trail the Rossoneri by five points with seven games to play.

Zlatan Ibrahimovic scored the winner against his former team when Milan beat Inter in November, but his suspension meant that Pato led the attack along with fellow Brazilian Robinho.

He played a one-two with Gennaro Gattuso on the edge of the Inter area but the veteran midfielder's attempted return pass went into the path of the onrushing Robinho, and Pato pounced on the loose ball to beat compatriot goalkeeper Julio Cesar.

Cesar was almost beaten again seven minutes before halftime, but Mark van Bommel's deflected shot looped onto the top of the bar and to safety.

Inter should have equalized two minutes before the break, but top scorer Samuel Eto'o made an uncharacteristic miss as he scuffed his shot wide of the goal.

His team's hopes of gaining parity suffered a huge blow nine minutes after the interval when last man Christian Chivu was sent off for clipping the heels of Pato as the forward burst towards Cesar's goal.

Pato, playing in his first Milan derby, doubled the lead in the 62nd minute when he headed home from Ignazio Abate's mishit shot after the right-back was put in space by Clarence Seedorf.

Milan had the ball in the net for a third time in the 76th minute, but second-half substitute Mathieu Flamini -- who replaced Gattuso -- had clearly strayed offside.

But another goal inevitably came, with substitute Antonio Cassano scoring from the penalty spot after being dragged down by Javier Zanetti -- his third since joining from Sampdoria in the January transfer window.

But the former Italy forward ruined his own night by getting booked twice within a minute -- the first for taking his shirt off to celebrate his goal and the second for a poorly-timed tackle on substitute Ivan Cordoba.

The result means Inter will lose second spot if Napoli win at home to fifth-placed Lazio on Sunday.

Inter still hold a 64-60 advantage in the 176 meetings between the bitter rivals, but must now recover for Tuesday's opening home leg of the Champions League quarterfinal against German club Schalke.

In Saturday's other match, Brescia moved out of the relegation zone on goal difference above Cesena with a 3-1 win at home to 10th-placed Bologna.