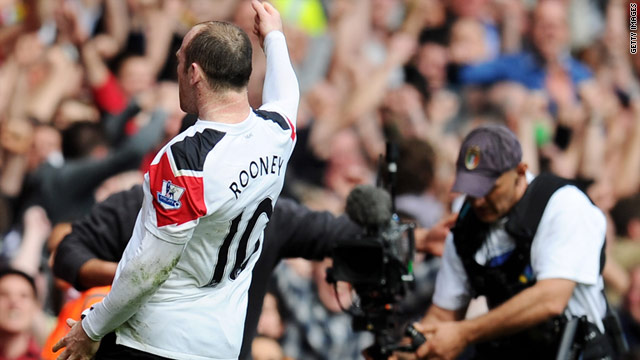 Wayne Rooney's expletive outburst on Saturday was recorded on television and broadcast around the world.
STORY HIGHLIGHTS

The 25-year-old faces a possible two-match suspension, meaning he could miss the Premier League leaders' home match against Fulham on Saturday and then the highly-anticipated tie with Manchester City on April 16.

He apologized following his foul-mouthed outburst, which came after he completed his hat-trick with a penalty in Saturday's 4-2 victory at West Ham and was shown around the world on television.

Marvelous Mourinho record falls -- but will it ever be beaten?

"The FA has charged Manchester United's Wayne Rooney for the use of offensive, insulting and/or abusive language," England's ruling body said in a statement on Monday.

So, just for clarification is swearing banned on the pitch totally? Are football stadiums 'no swearing' zones?!
--Rio Ferdinand on Twitter
RELATED TOPICS

"This charge relates to an incident during his side's fixture with West Ham United at the Boleyn Ground on April 2. Rooney has until 6 p.m. on April 5 to respond to the charge."

If Rooney contests the charge, or accepts it and tries to have the length of punishment reduced, then he takes the risk of receiving an even longer suspension.

The news comes as a blow ahead of United's European Champions League quarterfinal at English rivals Chelsea, with the first leg in London Wednesday.

Rooney has received his support from club and international teammate Rio Ferdinand, who wrote on social networking website Twitter after the FA announcement: "So, just for clarification is swearing banned on the pitch totally?"

The defender wrote on Sunday: "Are football stadiums 'no swearing' zones?! When I take my kids to a football match I'm getting him headphones coz swearing is rife!

"Newspapers and radio, come on give Wayne a break. He knows what he did was wrong and he has apologized, spoke to him this morning and genuinely sorry..."

The Israeli, who team remained in the relegation zone after Saturday's match, will have to watch from the stands for upcoming matches against Bolton and Aston Villa and was also fined after being found guilty of improper conduct.