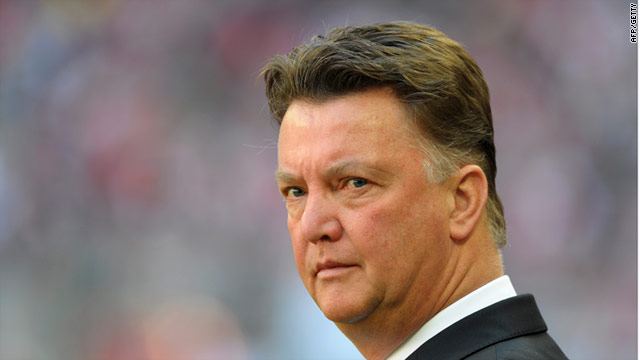 Louis van Gaal watches on as his side draw 1-1 at Nuremberg in his final game in charge.
STORY HIGHLIGHTS

The Dutchman was due to step down at the end of the season, but the board of the Bavarian giants held an emergency meeting after their disappointing 1-1 draw against Nuremberg Saturday and took the decision to replace him immediately.

A statement on the club's official website said the decision had been taken in the "interests of the club as a whole."

It added that the draw meant Bayern had slipped back into fourth place in the Bundesliga "increasing the danger of the club failing to hit its minimum target for the season, the chance of qualifying for the UEFA Champions League."

Van Gaal, 59, was informed of his sacking on return from Nuremberg. His assistants Frans Hoek, Jos van Dijk and Max Reckers have also been relieved of their duties.

Andries Jonker has been placed in temporary charge until the end of the season.

In terms of the decision, we simply didn't have an alternative
--Karl-Heinz Rummenigge
RELATED TOPICS

Van Gaal took Bayern to the domestic double last season and they lost in the final of the Champions League to Inter Milan.

But their form in the German league this season has been poor, trailing runaway leaders Borussia Dortmund, while defeat to Inter in their Champions League last 16 clash last month ended their hopes of silverware.

Currently in fourth, Bayern need to finish in the top two to gain automatic entry into the Champions League next season, with third place going into the final qualifying round.

Bayern chairman Karl-Heinz Rummenigge told AFP that they had been considering the decision to sack van Gaal for weeks.

"It is true we have taken a short-term decision but there has been dissatisfaction -- I have to make this clear -- for weeks," he said.

"At the end of the day, it is the responsibility of the club to do everything we can to get third place.

"In terms of the decision, we simply didn't have an alternative."

Bayer Leverkusen's coach Jupp Heynckes has already been announced as Bayern's head coach for next season.

His current side cut Borussia Dortmund's lead at the top of the Bundesliga to just five points Sunday as they came from behind to seal a 2-1 home win over relegation battlers St Pauli.

Dortmund were held to a 1-1 draw at Hamburg Saturday, but second-placed Leverkusen fell behind until Germany striker Stefan Kiessling equalized before Lars Bender scored the crucial winner.