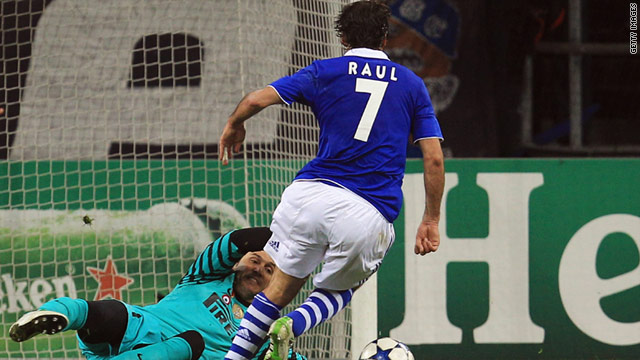 (CNN) -- Veteran striker Raul Gonzalez scored his 71st Champions League goal to help Schalke beat holders Inter Milan 2-1 on the night and 7-3 on aggregate to reach the semifinals of the competition on Wednesday.

Already in the driving seat after their stunning 5-2 first leg win at the San Siro, the German Bundesliga side never looked likely to relinquish their advantage and eased through to the last four, where they will now face Manchester United.

Raul opened the scoring on the stroke of half-time, controlling an inch-perfect pass from compatriot Jose Manuel Jurado, before rounding goalkeeper Julio Cesar to slip the ball home.

However, the Italian side levelled the scores just four minutes later when Thiago Motta was left unmarked from a corner to head home.

Benedikt Hoewedes then had a header ruled out for offside, but the Schalke defender was not to be denied and he hit the winner with nine minutes remaining, firing home after latching onto Raul's pass.

"If you only allow the Champions League winners a couple of chances, you know you have played well.

"Each player worked hard for each other and that was the key to our success," he added.

Schalke will host United in Gelsenkirchen on April 26 in the first leg, with the return at Old Trafford on May 4.