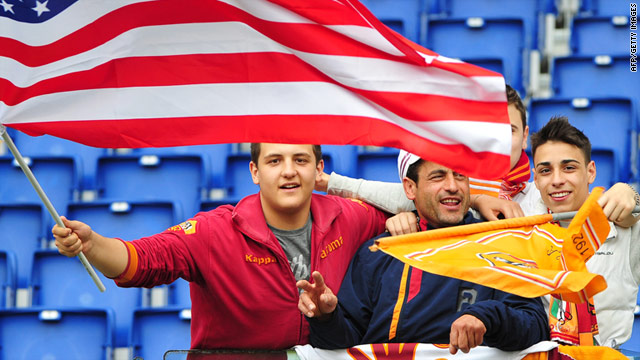 Roma fans fly a U.S. flag prior to Saturday's match against Palermo at the Stadio Olimpico in the Italian capital.
STORY HIGHLIGHTS
RELATED TOPICS

(CNN) -- AS Roma became the first Italian soccer club to be owned by foreign investors on Saturday when an American group completed its takeover of the Serie A side.

The consortium is headed by Thomas DiBenedetto, a partner of the New England Sports Ventures group which owns English club Liverpool and U.S. baseball team the Boston Red Sox.

He and his cohorts will have a 60% stake, with the remainder held by Italy-based European banking organization UniCredit -- which bought the club when president Rosella Sensi last year decided she wanted to sell up.

"The business aspect has been very important but I love Rome and I want to do something big for this city," Thomas DiBenedetto told reporters in quotes carried by the UK Press Association.

"I am proud of my Italian origins and for this reason I will do big things. I didn't expect so much attention. "I knew of the great passion from the Romans and this has been one of the reasons for doing this.

"I share this passion. I never played but my father played in the American Soccer League."

Founded in 1927, the club -- nicknamed "Giallorossi" (The Yellow-Reds) after the team colors -- has been listed on the stock exchange since 2000. Its website lists its share capital as almost €20 million ($28.9 million).

The Sensi family had been owners for 18 years, and in 2009 announced plans to move away from the Stadio Olimpico and build a new 55,000-capacity ground in the western suburbs of Rome which have yet to come to fruition.

Buoyed by the news, Roma went in Saturday's home match against Palermo in sixth place in the table, 12 points behind leaders AC Milan with six rounds to play.

But it ended in a defeat that dented the team's European hopes for next season despite the Wolves taking a 19th-minute lead through the club's veteran top scorer Francesco Totti, with the captain netting from the penalty spot.

However, Maurizio Pinilla leveled just before halftime also from a penalty after he was fouled, and 20-year-old Uruguayan striker Abel Hernandez scored twice in the last seven minutes before Mirko Vucinic's late consolation for Roma.

AC Milan moved six points clear at the top with a 3-0 victory at home to 17th-placed Sampdoria later in the evening.

Veteran Dutch midfielder Clarence Seedorf opened the scoring in the 20th minute with a freekick driven across the goal into the bottom corner, striker Antonio Cassano netted a penalty nine minutes after halftime and Brazil forward Robinho sealed it on 61.

Sampdoria will drop into the bottom three if Cesena beat bottom club Bari on Sunday, or Brescia win at Genoa.

Napoli can reduce the deficit to three again by winning at home to fifth-placed Udinese on Sunday, after which there will be five rounds to play.

Third-placed defending champions Inter Milan dropped eight points behind their arch-rivals after a 2-0 loss at lowly Parma, who moved four points clear of the relegation zone.

Sebastian Giovinco put Parma ahead in the 36th minute and Amauri -- another striker on loan from Juventus -- made it safe with four minutes to play.

It capped a miserable week for Inter, whose European Champions League title defense ended with a 7-3 aggregate quarterfinal defeat against Schalke.