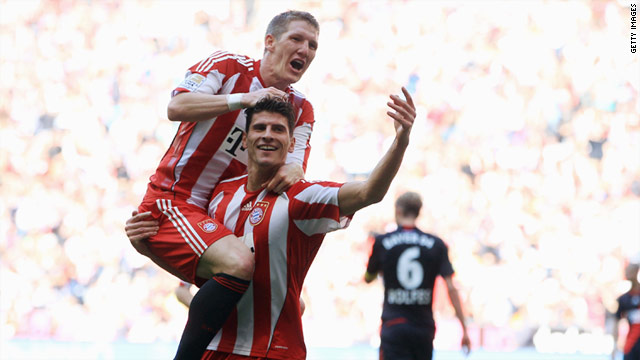 Germany international striker Mario Gomez scored a first-half hat-trick for the 22-time Bundesliga winners in a victory which saw the Bavarians climb into the third and final qualifying position for Europe's premier club competition.

The 25-year-old scored his treble between an early Simon Rolfes own-goal and a late strike from French winger Franck Ribery, with Switzerland striker Eren Derdiyok restoring some pride for Jupp Heynckes' team.

Leverkusen, four-times German runners-up but not since 2002 when the club also lost in the Champions League final, could have closed to within two points of league leaders Borussia Dortmund.

But Dortmund instead moved eight points clear with a 3-0 victory over Freiburg in Sunday's late match.

Heynckes, who has coached Bayern on two previous occasions, is set to move to the Allianz Arena next season as a replacement for sacked Dutch coach Louis van Gaal.

Van Gaal guided Bayern to a domestic league and cup double last season, also losing in the Champions League final, but the 59-year-old lost his job after last weekend's draw with Nuremberg.

Bayern, currently under caretaker boss Andries Jonker, are now one point ahead of fourth-placed Hannover -- who drew 0-0 at Hamburg on Saturday -- with four games left.

The opening goal against Leverkusen arrived after just seven minutes when Bastian Schweinsteiger headed a Thomas Muller corner onto the unfortunate Rolfes, who deflected the ball beyond goalkeeper Rene Adler.

Gomez grabbed a second in the 28th minute when Chile's Arturo Vidal made a mistake with a backpass, before 2010 World Cup golden boot winner Muller grabbed his second assist of the match as he teed up his teammate at the far post a minute before halftime.

Gomez claimed the match ball with his 22nd Bundesliga goal this season in first-half stoppage time, before Derdiyok found the roof of the net for the visitors just past the hour mark.

Borussia Dortmund, seeking a first title since the club's sixth success in 2001-02, had few problems at home to eighth-placed Freiburg.

Defender Marcel Schmelzer burst to the byline and cut the ball back for 18-year-old Mario Gotze to open the scoring in the 23rd minute, then Dortmund playmaker Nuri Sahin limped off with a knee injury.

Striker Robert Lewandowski made up for two earlier misses with the second goal just before halftime, with the Poland international pouncing after Freiburg's Omer Toprak deflected a pass from defender Mats Hummels into his path.

Kevin Grosskreutz sealed victory in the 78th minute with his 15th goal in all competitions this season after Lewandowski released Gotze and the teenager squared the ball to the 22-year-old.