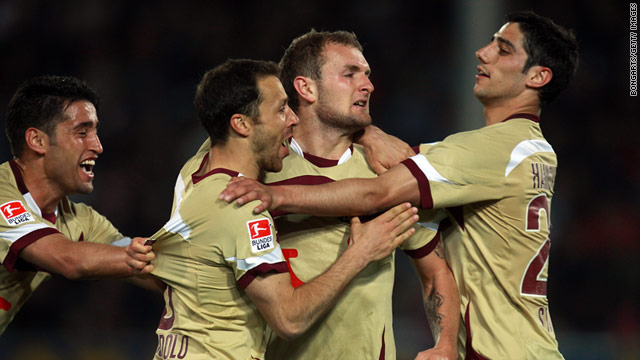 (CNN) -- Hannover moved up to third place in Germany with a 3-1 win at Freiburg on Thursday, knocking Bundesliga titleholders Bayern Munich out of the Champions League places.

The victory lifted Mirko Slomka's team two points above Bayern, who travel to Eintracht Frankfurt on Saturday -- after which both clubs will have three games to play.

Failure to qualify would be a disaster for Bayern, who reached the final of Europe's top competition last year and won a domestic double.

However, this season has been a major disappointment, with Dutch coach Louis Van Gaal losing his job earlier this month.

Hannover's hopes of qualifying for the first time were boosted by first-half goals from Mohammed Abdellaoue and Jan Schlaudraff and another in the second spell by Konstantin Rausch before Jan Rosenthal's late consolation for eighth-placed Freiburg.

In a match brought forward 24 hours due to the Easter holiday weekend, Hannover made the perfect start when Norway international striker Abdellaoue scored in the 24th minute from Schlaudraff's pass to make the most of his start in place of top scorer Didier Ya Konan.

Former Germany striker Schlaudraff made it 2-0 just after half an hour when he was sent clear by veteran midfielder Altin Lala.

Rausch made it safe in the 58th minute as he dived to convert Manuel Schmiedebach's cross, while midfielder Rosenthal reduced the deficit against his former club with 10 minutes to play from Heiko Butscher's left-wing cross.

Borussia Dortmund, who have an eight-point lead, can possibly clinch a first league title since 2002 on Saturday.

That will happen if Jurgen Klopp's team win at bottom club Monchengladbach and second-placed Bayer Leverkusen cannot match that result at home to mid-table Hoffenheim.