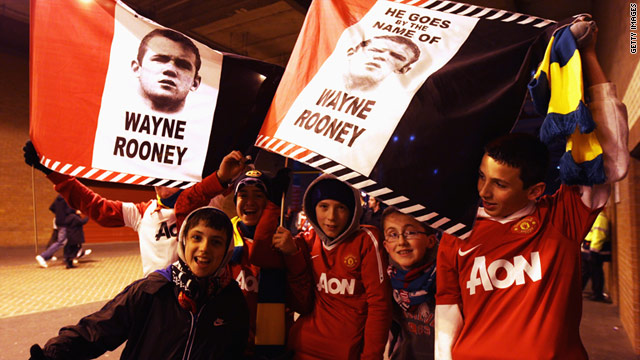 Manchester United's large fanbase is one factor behind the English club's rating as the most valuable in world soccer.
STORY HIGHLIGHTS
RELATED TOPICS

(CNN) -- Manchester United has been named as the world's most valuable football club for the seventh year in a row by Forbes, while its former star David Beckham is once again the highest-paid player.

Fellow Premier League club Arsenal came in third at $1.19 billion, with Germany's Bayern Munich at $1.1 billion and Spain's Barcelona down one place to fifth on $975 million.

Forbes, which will release the full list in its May 9 issue, said the average value of the top 20 clubs increased by 1.3% to $640 million, while average operating income rose 25% to $40 million.

It based its ratings on earnings before interest, taxes, depreciation and amortization.

United's parent company posted record pre-tax losses of $178 million last month, due to the huge debts the Glazer family incurred in buying the club for almost £800 million ($1.33 billion) in 2005, but it has consistently posted healthy operating profits.

Real Madrid's income of $537 million last year was the second-highest of any sports team in the world, behind the New York Yankees baseball franchise, and $109 million more than United's.

President Florentino Perez has sanctioned huge spending sprees on players since taking over for a second time, including a world-record $130 million on Cristiano Ronaldo.

Arsenal, which is in the middle of a takeover bid by American Stan Kroenke, has a more conservative financial model.

Forbes said it had boosted its worldwide appeal by agreeing a deal with the largest regional sports channel in U.S., YES Network.

Barcelona is on course for a third successive Spanish title, but its increasing debt problems have diminished its value. Forbes also pointed to doubts over Barca's lucrative broadcasting deal with "financially distressed" MidiaPro.

Italy's AC Milan was rated sixth on $838 million, but suffered from a drop in average attendances of 15,000 per home game last season which meant that match-day revenue reduced by 6%.

English club Chelsea was ranked seventh on $658 million as Forbes considered the €726 million ($1 billion) loan from owner Roman Abramovich that the club converted to equity two years ago is still repayable to the Russian.

Former England captain Beckham's career is in its final stages as he plays out his five-year contract with Los Angeles Galaxy, but he still earned $40 million last season according to Forbes.

It said the 35-year-old former United and Real midfielder added Pepsi and Electronic Arts to his list of endorsements, which is headed by his deal with Adidas -- which Forbes described as the biggest in world soccer.

Real Madrid's Ronaldo, the most popular athlete on Facebook with more than 24 million followers, was second on $38 million thanks to his contracts with sponsors such as Nike, Armani, Coca-Cola and Castrol.

Barcelona's two-time world player of the year Lionel Messi was third on $32 million. The Argentina star has deals with Adidas, Lay's, Konami, Audemars Piguet, Chery and AirEuropa worth half of his total income.

They were followed by Brazilian duo Kaka ($25 million) and Ronaldinho ($24 million).

However, his earnings will be down this year as his lucrative Gillette deal has now ended.

United's Wayne Rooney was seventh on $20 million, but while he still endorses Nike and Electronic Arts the England striker's $1 million-a-year deal with Coca-Cola has ended.

Samuel Eto'o is the only African on the list, with the Inter Milan striker ranked 10th by Forbes with earnings of $15 million behind Chelsea's Frank Lampard and AC Milan's Zlatan Ibrahimovic (both $17 million).

A four-time African player of the year, the Cameroon international has deals with Puma and Ford.