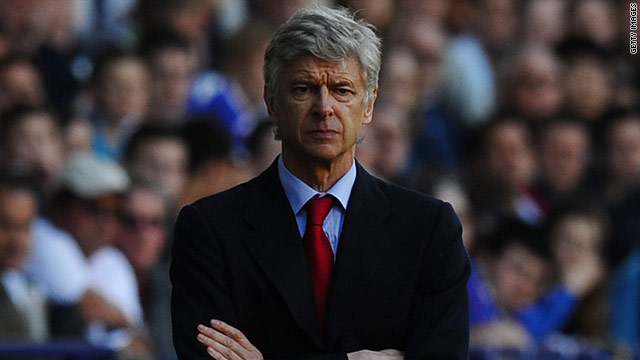 Arsene Wenger has guided Arsenal into the Champions League in all 15 of his seasons at the club.
STORY HIGHLIGHTS

(CNN) -- Arsenal manager Arsene Wenger has shouldered the blame for his team's shortcomings this season after a 2-1 defeat at Bolton Wanderers on Sunday all but ended their English Premier League title hopes.

The Gunners have not won in their last three league fixtures and have seen their season fall apart since a 2-1 loss to Birmingham City in the League Cup final on February 27.

A 2-1 victory over Fulham in December sent Arsenal top of the table, but in March they were eliminated from the European Champions League at the last 16 stage by Barcelona and beaten by Alex Ferguson's United 2-0 in an FA Cup quarterfinal.

Has time run out for Arsene Wenger?

If someone is to blame, it is me. I pick the team, I choose the players.
--Arsene Wenger
RELATED TOPICS

Despite facing up to the prospect of a sixth season without winning one of the sport's major honors, Wenger refused to blame his squad.

"I feel the players had an outstanding attitude all season and are not to blame," the 61-year-old told reporters after the match at the Reebok Stadium. "If someone is to blame, it is me. I pick the team, I choose the players."

But the former Monaco coach did bemoan his team's failure to take advantage of a favorable run of fixtures, and suggested his young squad lack the maturity to secure silverware.

"It's very unsatisfactory because we have had one of our easiest run-ins for a long, long time and we didn't take our chances.

"That is frustrating because I feel the potential is there but we still lack something -- maturity and experience and calm in important situations."

"It's hard to lose a game like that," Wenger added. "If you look at the way we conceded the goals, it's hard to swallow. We gave everything. Our attitude was fantastic and we had chances to win it.

"But we could have taken nine points [from the last three games] and we have taken two and that's a massive difference. We have to look at some of these things but we do not have to change the way we play."

The 13-time champions of England know a defeat in their next match against United on May 1 will end their hopes of a first league championship since 2004.