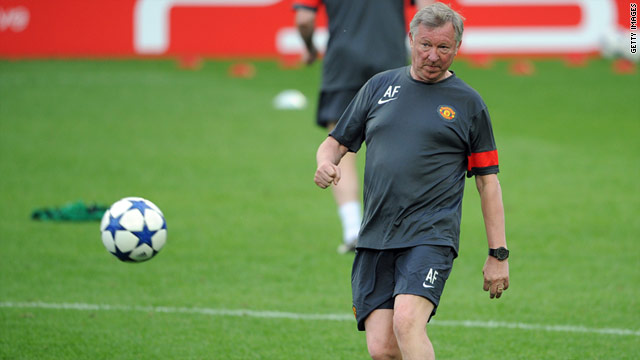 Alex Ferguson's team have been in the semifinals of the Champions League for four of the last five seasons.
STORY HIGHLIGHTS

(CNN) -- Manchester United manager Alex Ferguson has admitted he is "envious" of the success Real Madrid have enjoyed in the European Champions League.

Ferguson, 69, was speaking ahead of the first match of his side's two-legged semifinal against German side Schalke in Gelsenkirchen Tuesday.

The Old Trafford club have lifted European club football's top prize on three occasions, but Real -- who face arch rivals Barcelona in the other last-four tie on Wednesday -- have won the famous trophy a record nine times.

The Scot also said his current squad of players belong on this stage due to the experience they have gained from competing in four Champions League semifinals in the last five years.

"The present group have a lot of experience in Europe now," Ferguson told the club's official web site.

"The semifinals is where we should be, you get envious of other clubs with great records in Europe. We're trying to get parity with the likes of Real Madrid."

Ferguson, who is close to guiding United to an unprecedented 19th English title, also praised the form shown by English duo Rio Ferdinand and Wayne Rooney.

"Rio's experience showed itself in the first leg [of the quarterfinal] against Chelsea. He was immense. Experience and ability is vital in the situations we have at the moment. He's fresh and ready to play and it's a big boost for us."

"Wayne's form has been fantastic the last two months. The more important thing is the freshness that has come into the team with players coming back. Anderson, Rio, [Antonio] Valencia and [Ji-Sung] Park.

"Sometimes it happens that way. When big competitions come along, you find all your players are fit. It brings selection headaches but they're the ones you want.

Rooney, 25, announced he wanted to leave United in October after a stuttering start to the season, but the former Everton striker changed his mind and signed a new five-year contract with the Red Devils before rediscovering his goalscoring form.

"There is an expectation of the boy [Rooney]. He's stepped up to the mark to that. It's all down to him, no-one else."

Another forward in top form is Schalke's former Spain striker Raul, who is the all-time leading scorer in the Champions League with 71 goals.

United's veteran goalkeeper Edwin Van der Sar has warned his teammates of the danger the former Real star will pose.

"He was quite an amazing player for Real Madrid at a high level," the 40-year-old, who will retire at the end of this season, said.

"All the goals he scored in La Liga and, of course, he's the top scorer in the Champions League. He's not someone you can take your eyes off because he's so dangerous and he only needs a little chance to score a goal.

"Our defenders should be on their toes when they play against him."

The second leg between United and Schalke will take place at Old Trafford on May 4, with the winner going on to face Real or Barcelona in the final at Wembley Stadium, London on May 28.