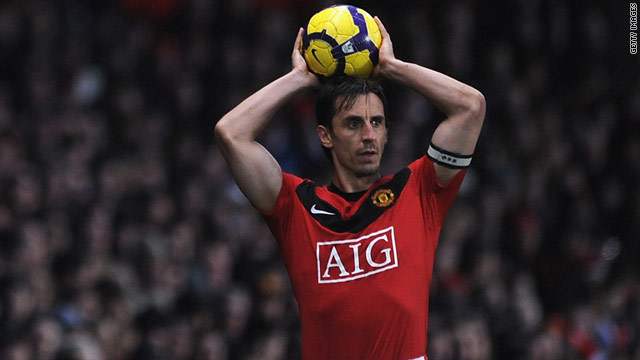 Gary Neville was part of a golden generation of young players brought through at Manchester United in the 1990s.
STORY HIGHLIGHTS

(CNN) -- Former Manchester United defender Gary Neville believes Sunday's trip to Arsenal on Sunday is "the most difficult" away game of the season for the English Premier League leaders.

Defeat at the Emirates Stadium would end Arsenal's hopes of securing the EPL title and a first major honor since victory over United in the 2005 FA Cup final.

Victory would put the Red Devils within touching distance of a record 19th English league title.

Has time run out for Arsene Wenger?

Going to Arsenal is probably the most difficult game, and has been for many, many years
--Gary Neville
RELATED TOPICS

"Going to Arsenal is probably the most difficult game, and has been for many, many years," Neville, who announced his retirement in February aged 35, told CNN.

"Along with Liverpool and Chelsea, those games you can never tell if you're going to win. Anything can happen and, while we've had some good results there in the last couple of years, we've some bad experiences down there as well."

Former team captain Neville won eight league championships during a 19-year career with United, and the 85-cap England international said a draw against Arsenal would represent a good result for Ferguson's side.

"I think if we can get a point on Sunday, come out of there with something, it would be really important for us."

Neville, who was part of the 1999 European Champions League-winning squad and also won the FA Cup on three occasions, claimed the midfield area could be where the match is won or lost.

"The key battle against Arsenal is midfield. We've always gone into the games over the last five or six years making sure we dominate midfield. It's Arsenal's strongest area," he said.

"We always make sure we pack our midfield with strength, power and make sure we can get physical against them. If you let Arsenal play, they are the best football team in the country playing through midfield.

"If you win that battle, towards the end of the game you can start to show your strength."

If you win that (midfield) battle, towards the end of the game you can start to show your strength
--Gary Neville

Hernandez, also known as "Chicarito," has enjoyed a successful debut season in England after arriving in Manchester from Mexican side Guadalajara.

The Mexico striker has hit 12 goals in 24 league matches, and Neville has been impressed with the form shown by the 22-year-old.

"I don't think anyone had heard of him when we signed him at the end of last season. But then he played for Mexico at the World Cup and everyone started to think 'This kid doesn't look bad.'

"He lets them get the hunger for winning, see the work ethic, and I think Chicarito is an unbelievable example of how that's happened.

Someone who cost $11.5 million and looks like one of the best center-forwards in the league."