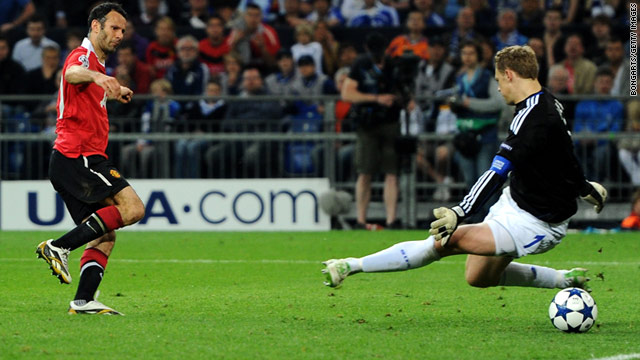 Ryan Giggs became the oldest player to score in the Champions League when he put Manchester United ahead.
STORY HIGHLIGHTS

Second-half goals from Ryan Giggs and Wayne Rooney gave United a 2-0 victory in Germany ahead of next Wednesday's second leg of the semifinal at Old Trafford.

It could have been a much greater margin as goalkeeper Manuel Neuer performed heroics to keep the match scoreless for more than an hour, while United's defense has yet to concede away from home in the tournament this season.

But Rooney set Giggs clear with a clever pass and the 37-year-old slipped the ball past Neuer with his favored left foot in the 67th minute to make up for several earlier misses by the Welshman.

England striker Rooney doubled the lead three minutes later after Javier Hernandez nipped in front of the static Schalke defense and slid the ball into his path.

"We're delighted but a bit disappointed in terms of not scoring more," Rooney told reporters. "We have done very well. We have to be professional for the second leg as Schalke can't be taken lightly. They went to Inter and won 5-2 (in the quarterfinals)."

Neuer, who has announced that he will not extend his contract at Schalke and will reportedly make a post-season move to Bayern Munich, had earlier shown why so many clubs -- including United -- have been linked with the 25-year-old.

The Germany international denied Giggs twice in the first half and also saved from Hernandez, and then kept out Michael Carrick's header straight after the break.

Giggs shot embarrassingly wide with his weaker right foot after a clever turn outwitted two defenders, then Hernandez was ruled offside before putting the ball past Neuer in the 51st minute.

It was the 69-year-old Scot's 100th away game in Europe as a manager, as he seeks to add to Champions League titles in 1999 and 2008 to give United a fourth European crown overall.

United have every incentive to reach the final, which will be played on home soil at London's Wembley Stadium on May 28.

However, the 18-time English champions have never beaten a German team in four two-legged ties so far in the competition, losing to Bayern in last season's quarterfinals.

"We have to recognize that we were dominated by a team playing in a different dimension," Schalke defender Christoph Metzelder said. "We still have hope, anything is possible. We'll try to do everything to win at Old Trafford."

The winning team will progress for a title match against Spanish giants Barcelona or Real Madrid, who clash in the first leg of their semifinal at the Santiago Bernabeu on Wednesday.

Meanwhile, Stoke City moved up to ninth place with a 3-0 win over relegation-threatened Wolverhampton in Tuesday's only Premier League fixture.

Striker Kenwyne Jones opened the scoring with a header after 16 minutes, while defender Ryan Shawcross made it 2-0 from close range on halftime before winger Jermaine Pennant made it safe with a deflected effort soon after the interval.

However, Stoke winger Matthew Etherington could miss the FA Cup final against Manchester City on May 14 after being stretchered off in the first half with a hamstring injury.

The defeat left Wolves second from bottom with four matches to play.