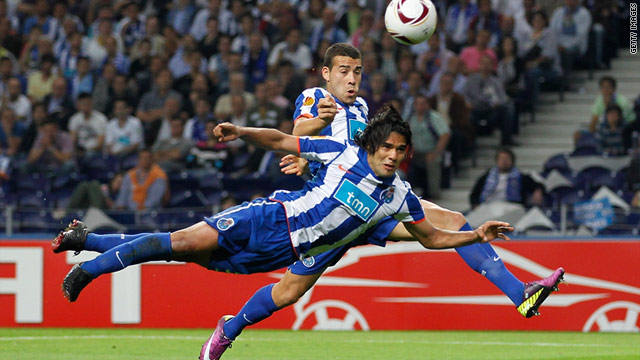 The Spanish club took the lead through Ruben Cani just before halftime after dominating the opening period, but had no answer in the second spell against the Portuguese champions.

Porto, who won the tournament in 2003 when it was still known as the UEFA Cup, will face either Benfica or Braga in next month's final in Dublin if they successfully negotiate the trip to El Madrigal.

Benfica clinched a 2-1 victory at home, leaving the second semifinal evenly poised ahead of next week's return leg in Braga.

Villarreal, fourth in Spain's La Liga, had looked surprisingly comfortable away from home against a team that wrapped up the national league crown with five games to play -- and whose coach has everyone comparing him to his mentor Jose Mourinho.

Andre Villas Boas could only look on as Ruben Cani headed Villarreal in front with a near-post effort from Nilmar's cross as Porto's defense was caught out again.

But whatever the 33-year-old said at halftime, it did the trick as his team ran riot.

Falcao equalized from the penalty spot three minutes after the break after being brought down by Diego Lopez, then just after an hour Fredy Guarin headed in a rebound after his first effort was pushed onto the post by the goalkeeper.

Falcao made it 3-1 in the 67th minute as he lunged to volley in a perfect cross from Brazilian striker partner Hulk, then his diving header from Guarin's free-kick on 75 made it a three-goal advantage.

The 25-year-old gave Villarreal a mountain to climb in the second leg with another stunning header from a corner in the final minute, sealing Porto's 13th successive victory in all competitions.

Villas Boas is on course for a treble in his first season in charge, which Mourinho also achieved in 2003-04, with Porto also in the Portuguese Cup final.

Benfica, a distant second in the league by 19 points and beaten 3-1 by Porto in the domestic cup last week, made a strong start against Braga as Oscar Cardozo had an 11th-minute effort ruled out for offside.

And the Paraguay striker was involved when his team took the lead five minutes after halftime, with his header hitting the post after a superb run down the right by Argentine defender Maxi Pereira.

Vieira Jardel converted the rebound for his first European goal.

The 33-year-old Brazilian cleverly flicked in a header from a free-kick to leave goalkeeper Roberto helpless. It was a double blow for Benfica as the set-piece came from a foul by Argentine midfielder Pablo Aimar, who will now miss the second leg after being booked for his efforts.

But Cardozo ensured two-time European champions Benfica will at least have a lead to protect, with the 27-year-old curling in a superb left-foot free-kick just before the hour mark.

Earlier on Thursday, UEFA fined Rangers €80,000 ($118,000) and banned the Scottish club from selling tickets at two away games and one at home.

The punishment stems from incidents during both legs of the Europa League last-16 tie against Dutch side PSV Eindhoven, with Rangers fans accused of "discriminatory behavior" -- or sectarian chants by the club's predominantly Catholic support.

It is the third time UEFA has fined the Glasgow-based team for such an offense following incidents in European competition in 2006, 2007 and 2009, according the the UK Press Association.

The ticket ban for one away match and the home one has been suspended for a probationary period of three years.

Rangers have three days in which to appeal, and the club's chief executive Martin Bain said he would first wait for a written explanation from UEFA.

"We are bitterly disappointed that our club has been placed in a position where we are subjected to these kind of sanctions by UEFA," he told the Rangers website.

"The club put its own case very forcibly to UEFA, and the more draconian sanctions that were recommended by the disciplinary inspector have been mitigated to a degree.

"To be clear, we condemn sectarianism and there is no doubt the mindless behavior of an element of our support has exposed the club to a very serious situation. The people who engage in this type of behavior are damaging the club they claim to support."