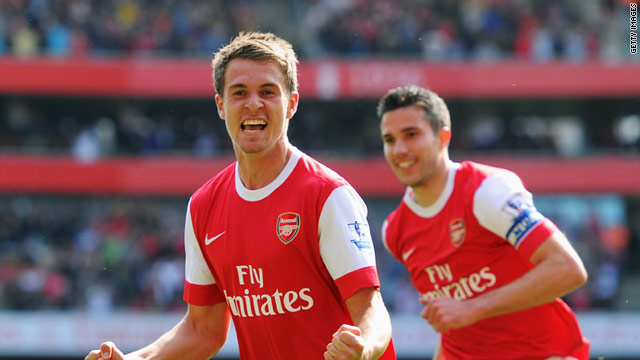 Aaron Ramsey celebrates his winning goal for Arsenal at the Emirates.
STORY HIGHLIGHTS

(CNN) -- Aaron Ramsey scored the only goal of the match in the second half as Arsenal beat leaders Manchester United at the Emirates Sunday to blow the English title race wide open.

A win for United would have all but sealed a record 19th championship, but they now lead Chelsea by just three points and Arsenal by six.

The top two play effectively a title decider at Old Trafford next weekend, with Arsenal waiting to pounce if either falters.

"In terms of ability -- a game at Old Trafford, the supporters will be ready for it -- and so will our players," defiant United manager Alex Ferguson told Sky Sports.

In terms of ability -- a game at Old Trafford, the supporters will be ready for it -- and so will our players
--Alex Ferguson
RELATED TOPICS

Ferguson's team, who have a poor record against the top six this season, particularly away from home where they have failed to win, fell victim to a 56th minute strike from young Welshman Ramsey.

Arsenal might have had a penalty in the first half when Nemanja Vidic appeared to use his hand to deflect Theo Walcott's cross away from Robin van Persie as the Dutchman prepared to head towards goal, but referee Chris Foy ignored their claims.

United's Wayne Rooney went close with a curling free-kick that Wojciech Szczesny saved superbly after the break before Ramsey scored his first Gunners goal since January 2010.

He was set up by Van Persie who cut the ball back for him to beat Edwin van der Sar.

Nani went close for United and Michael Owen had a penalty appeal turned down, but Arsenal deservedly held on for their first victory over United since November 2008.

Sunday's late kick off saw Manchester City consolidate fourth place with a 2-1 win over bottom side West Ham at Eastlands.

City are now seven points clear of Liverpool and Tottenham as they try to claim the final Champions League qualifying position.

Nigel de Jong and a Lars Jacobsen own goal gave City a 2-0 lead after 15 minutes.

But Demba Ba pulled one back in the 33rd minute and the home side had to endure some nervous moments before sealing the three points.

Earlier Sunday, Liverpool moved over Tottenham into fifth place on goal difference with a 3-0 win over Newcastle at Anfield.

Maxi Rodriguez opened the scoring in the 10th minute when his shot deflected in off Danny Simpson.

Dirk Kuyt scored the second in the 59th minute after Luis Suarez was fouled by Mike Williamson.

At St Andrew's, 10-man Birmingham boosted their survival bid by holding on for a 1-1 draw against fellow strugglers Wolves.