Barcelona held but go through to Champions League final 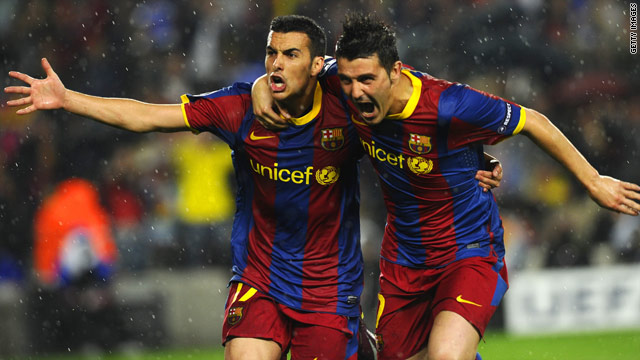 (CNN) -- Barcelona reached the Champions League final after drawing 1-1 with Real Madrid in the Nou Camp Tuesday to go through 3-1 on aggregate.

2-0 to the good from the first leg at the Bernabeu, Barcelona took the lead through Pedro in the 54th minute while Marcelo scored the equalizer for Real 10 minutes later.

Barcelona will play either Manchester United or Schalke at Wembley on May 28 with the English side having a 2-0 lead heading into the second leg at home Wednesday.

In contrast to the ill-tempered first leg, both teams ended the match with a full set of players and there were none of the ugly confrontations that marred that encounter.

Real proved obdurate opponents but rode their luck in the first half as Lionel Messi forced two fine saves from Iker Casillas before dragging a shot wide from a great position.

It is a unique feeling, to once again be in the final
--Andres Iniesta
RELATED TOPICS

But in the second half, Real showed more purpose and Barcelona were fortunate when Gonzalo Higuian had the ball in the net only for the referee to rule that Javier Mascherano had been fouled by Ronaldo in the build-up.

Real responded as Angel Di Maria hit the post but retrieved the ball to play in Marcelo, who scored with a fine strike.

Pressure from the visitors led to a tense finale to the match, but with victory assured Barcelona captain Carles Puyol departed to be replaced by Eric Abidal to a thunderous reception.

Abidal has made a full recovery after a liver tumor and at the final whistle he was hoisted high by his teammates as they celebrated reaching the final of European football's top club competition.

"It is a unique feeling, to once again be in the final," Iniesta, who missed the first leg through injury, told AFP.

"Winning a confrontation like this one deserves to be feted."

Real Madrid coach Jose Mourinho was banned from taking any part in the second leg after being sent off for protesting Pepe's dismissal in the first match and he watched on television at his team's hotel.

He would have seen an improved performance from his side but Barcelona always had the edge on their bitter rivals over the two legs as they head for a likely repeat of the 2009 final against Manchester United, which they won.