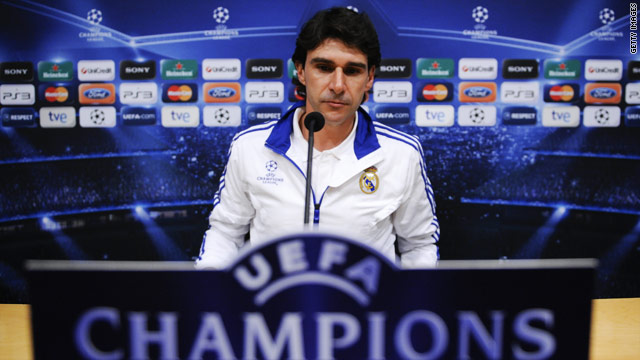 Real assistant coach Aitor Karanka turned up the temperature ahead of Tuesday's return in the Nou Camp with a strongly worded attack on their arch-rivals.

Karanka was reacting to UEFA's decision to throw out complaints by both the Spanish giants about each other's behavior during the match in the Bernabeu, won 2-0 by Barcelona.

There are Barca players who didn't respect the principles of fair play or who made racist insults, covering their mouths, who will be on the pitch
--Aitor Karanka
RELATED TOPICS

"We have been punished but there are Barca players who didn't respect the principles of fair play or who made racist insults, covering their mouths, who will be on the pitch tomorrow." Karanka told gathered reporters.

He was appearing at the pre-match conference in place of Real manager Jose Mourinho, who has been banned for the second leg for his protests after the second half dismissal of Pepe.

Barcelona coach Pep Guardiola said Real Madrid were entitled to make complaints to UEFA, but he stood by his players.

"They (Real Madrid) may think we're not fair and I think the opposite. I know my players much better than their legal department," he told official Barcelona website.

"At this club we transmit certain values to our people. The Madrid manager was here for four years and he knows that."

Mourinho will be forced to watch the match from the stands, but Karanka said the team were desperate to win for him.

"If we could win and dedicate the victory to him it would be something important.

"Real Madrid have 109 years of proud history and we will fight to the end," he added.