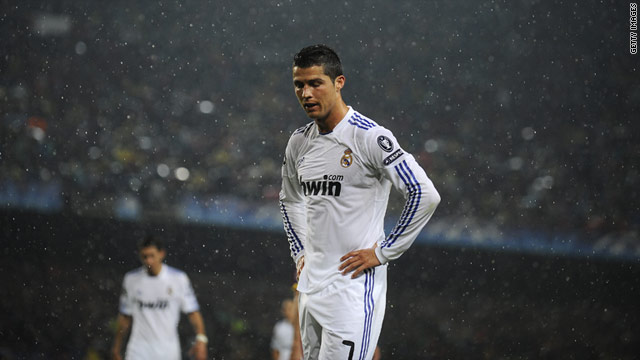 Cristiano Ronaldo cuts a forlorn figure as Real Madrid are eliminated from the Champions League by archrivals Barcelona.
STORY HIGHLIGHTS

Real could only draw 1-1 at the Camp Nou, losing 3-1 on aggregate after last week's controversial 2-0 defeat to Barca in Madrid which left both clubs facing charges from ruling body UEFA.

It was the two teams' fourth meeting in 18 days -- clashes known as "El Clasico" -- and tensions between the clubs have become strained in that period, with allegations of foul play and racism being made.

There was further controversy on Tuesday, when Real saw a 48th-minute goal from Argentina forward Gonzalo Higuain ruled out by referee Frank de Bleeckere after Ronaldo was adjudged to have fouled Javier Mascherano.

Barca held but go through to Champions League final

Manchester United will play to win

"Once again it was the referee that didn't allow us to dictate the outcome," Ronaldo, who became the world's most expensive player when he moved to the Bernabeu from Manchester United in 2009, told Real's official website.

"We knew we could beat Barca, but the referee didn't let us. Higuain's goal was good. Pique pushed me and I landed on Mascherano. He didn't used to fall to the ground in England, but he's picked up the bad habit of doing it here like everyone else."

Josep Guardiola's Barca took the lead on the night when Spain forward Pedro coolly converted after a pass from compatriot Andres Iniesta on 54 minutes.

Real, without head coach Jose Mourinho after he was sent to the stands in the first leg, equalized through Brazil's Marcelo in the 65th minute following a shot from Angel Di Maria that rattled the post.

Los Blancos were left frustrated after last week's first leg, when they felt Portugal defender Pepe was wrongly dismissed for a challenge on Dani Alves.

Has the time arrived for change in football?

"The referee in the first match took away our chances of playing the final," Pepe's fellow Portugal international Ronaldo said.

"Whoever knows anything about football knows that Barcelona get preferential treatment. We knew something would happen. We knew that if we scored a goal that everything would be done to keep us from going through.

"This isn't good for football. We should just stay home and allow Barcelona to play alone if things don't change."

Guardiola has guided the Catalan club to the second final in Europe's premier club competition under his stewardship and a third in five years.

Barca secured the first of three Champions League triumphs at London's Wembley Stadium in 1992, a match Guardiola played in, and will return to the rebuilt venue for the May 28 showpiece.

"They just keep going and going. I give my thanks to every one of them; what they have achieved is beyond definition. We won our first European Cup in Wembley and now we are going in search of our fourth."

Barca look likely to face Manchester United in a repeat of the 2009 final in Rome, after the English Premier League leaders defeated German outfit Schalke 2-0 in their semifinal first-leg tie on April 26. The two teams meet again at United's Old Trafford on Wednesday.

"I'm not sure who we will face but I imagine it will be Manchester United," Guardiola said.

"I think Alex Ferguson is always there, in the Champions League or Premier League, competing for titles. It would be an honor for me, a young coach, to reach the final against him."