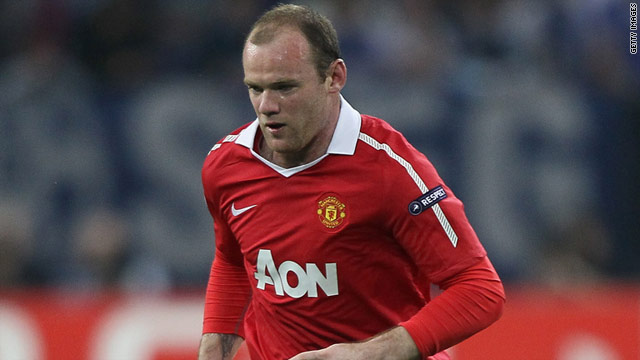 Rooney, 25, scored United's second goal in their 2-0 win in Gelsenkirchen on April 26, a victory which has left Alex Ferguson's team on the brink of facing Barcelona in the Wembley final on May 28.

The England striker missed training on Tuesday ahead of the Old Trafford clash and Ferguson said Rooney is struggling with a hamstring problem.

"He didn't train this morning," Ferguson told a pre-match press conference. "He has a tight hamstring so we left him today [Tuesday]. We'll see what he's like tomorrow.

Has the time arrived for change in football?

He has a tight hamstring so we left him today [Tuesday]. We'll see what he's like tomorrow
--Alex Ferguson
RELATED TOPICS

Ferguson is looking to guide United into the final for the third time in five years, and the Scot revealed midfielder Darren Fletcher will play some part in the last-four tie having recovered from a virus.

"Darren Fletcher will play part of the game," he said. "He's working hard and he'll be involved."

The 69-year-old also said changes will be made from last week's starting line-up, as United look ahead to a crucial match with English title rivals Chelsea on Sunday.

The club's web site confirmed attacking duo Dimitar Berbatov and Michael Owen, as well as veteran Paul Scholes, will all come in for the three-time European champions against the German outfit.

"If you look at the experience of last year, when we lost the league, it was after a Wednesday game against Bayern Munich. The team were very tired against Chelsea in that next game. That will have a bearing on my team selection."

Schalke coach Ralf Rangnick wants his team to show an improvement after a disappointing performance in the reverse fixture.

"We want to show we can play better, that we learned our lesson from last week and then we'll see what happens," said Rangnick.

"If we have a chance it is up to us to perform in contrast to the first leg. We need to take a different approach, learn from that and apply the lessons tomorrow [Wednesday]."

The 52-year-old has instructed his charges to take inspiration from a United comeback in 1999, when they famously scored two goals in the closing moments of a Champions League final against Bayern to emerge triumphant.

"We have to take our chances when we get them, even if there are just two minutes left. You only have to think of Man United in the Champions League final when they came back to win 2-1."

United and Schalke will be fighting for the right to meet Pep Guardiola's Barcelona side in London, after the Spanish champions defeated arch-rivals Real Madrid 3-1 on aggregate in the other semifinal.