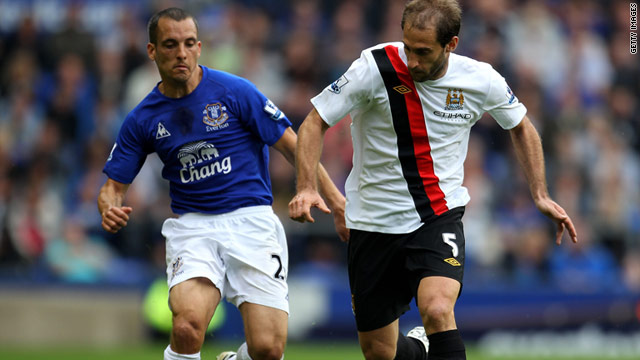 (CNN) -- Manchester City missed the opportunity to tighten their grip on fourth place in the English Premier League on Saturday as they lost 2-1 to Everton at Goodison Park.

Roberto Mancini's men took the lead in the first half when David Silva set up Yaya Toure to blast the ball past Tim Howard in Everton's goal in the 28th minute.

But a decisive second goal didn't come as Everton mounted a spirited comeback in the second half to seal victory.

Sylvain Distin headed home from a Mikel Arteta free kick in the 65th minute to level the scores and seven minutes later Leon Osman put the Toffees ahead with another header -- this time from a Phil Neville cross.

The win sees Everton consolidate seventh place while Manchester City, who play Tottenham Hotspur in their next league match, stay fourth with 62 points and have more work to do if they are to secure the fourth Champions League spot.

Spurs missed the chance to significantly narrow the gap on City as they drew 1-1 with Blackpool at White Hart Lane.

Relegation-threatened Blackpool took the lead when Charlie Adam netted from the penalty spot in the 76th minute.

It was a welcome reprieve for Adam who had missed a penalty a minute earlier when Heurelho Gomes dived to his left to deflect the Scottish midfielder's shot around the post after Michael Dawson had handled the ball in the area from a corner.

The Brazilian's save gave the visitors another corner which saw him go from hero to villain in an instant as he fumbled his catch and then brought down striker Gary Taylor-Fletcher.

But Jermain Defoe salvaged a point for Tottenham with a crisp 25-yard drive in the 89th minute to leave Harry Redknapp's side one place below, but six points adrift of fourth-placed City.

Blackpool remain in 17th place level on 36 points with Wigan.

Eighth-placed Bolton Wanderers slumped to their third consecutive league loss as they went down 2-1 at home to Sunderland.

Bolo Zenden opened the scoring for the visitors in first-half injury time when he slotted home after rounding Bolton keeper Jussi Jaaskelainen.

The score remained the same for much of the second half but when Bolton's Ivan Klasnic headed home with just three minutes remaining, Own Coyle's men looked to have snatched a point.

Sunderland, however, weren't to be denied and Zat Knight was on hand to turn in Ghanaian midfielder Sulley Muntari's shot in the third minute of injury time.

At the bottom of the table, West Ham looked to be heading for another defeat against Blackburn when Jason Roberts opened the scoring for the visitors in the 12 minute.

But the Upton Park faithful's patience was rewarded when Thomas Hitzlsperger salvaged a point with a strike in the 78th minute.

Nevertheless, West Ham's battle to stay up looks increasingly hopeless as they remain rooted to the bottom-of-the-table with 33 points -- three points from safety with only two games left to play.

The point lifts Blackburn to 15th.

Fellow strugglers Wigan also claimed a point on Saturday with a 1-1 with Aston Villa at Villa Park.

Wigan took the lead in the 10th minute when French midfielder Charles N'Zogbia scored, but their advantage only lasted seven minutes as Ashley Young fired home from 25 yards.

The result leaves Roberto Martinez's men is a perilous position in 18th place. Aston Villa now have 42 points but remain in 14th place.

Shola Ameobi opened the scoring from the penalty spot in the 36th minute after Birmingham's Liam Ridgewell had been shown a red card for deliberate handball.

Steven Taylor then doubled the lead seven minutes later with a powerful header.

Lee Bowyer gave Birmingham some hope as he pulled one back on the stroke of halftime, but the Blues couldn't find an equalizer in the second half, leaving them four points above the relegation zone in 16th place. Newcastle move up to 10th.

Sunday sees the Premier League's top two teams go head-to-head in a match that will likely decide who will win the title this season as Manchester United host Chelsea at Old Trafford.

A win for United would virtually seal their 19th English league title putting them six points ahead with two games remaining, while a win for the 2010 champions Chelsea would see them draw level with United on 73 points and top the table on goal difference.