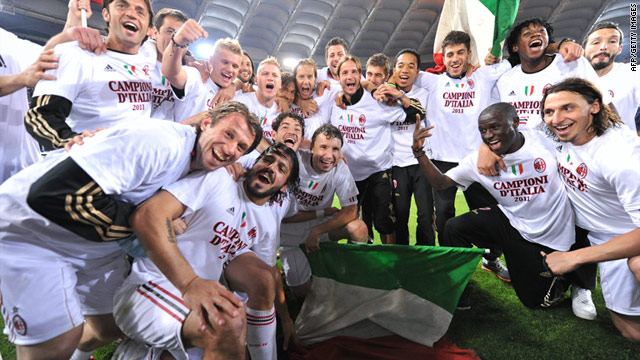 (CNN) -- AC Milan clinched their first Serie A title since 2004 on Saturday night as they drew 0-0 with Roma at the Stadio Olimpico.

The draw means that Milan now have an unassailable nine-point lead at the top of the table. Even if Inter managed to finish level on points, Milan's superior head-to-head record against them this season means they cannot be beaten.

The league title -- the club's 18th in total -- brings to an end a period of dominance by their city rivals who have won the last five league titles in Italy.

"We gave a lot all year long to get here and we deserve to win. I'm lucky because the president (Silvio Berlusconi) gave us the opportunity (with new signings) to get important results," Milan coach Massimiliano Allegri said, AFP reported.

Allegri deserves a 10 out of 10, he was the architect of this success, he managed to keep the group compact
--Gennaro Gattuso
RELATED TOPICS

Winning the title has also proved the doubters wrong who said his team was too old, Allegri said.

"We won 23 out of 36 games and proved that we deserved it," Allegri said, AFP reported.

Milan's vice-captain Gennaro Gattuso was full of praise for his coach.

"Allegri deserves a 10 out of 10, he was the architect of this success, he managed to keep the group compact," Gatusso said, AFP reported.

Only needing a draw to ensure the title, Milan, understandably, played conservatively throughout the 90 minutes, doing what was necessary to see them over the finishing line.

Few clear-cut chances fell to either team in the first half, but Roma's Yugoslav striker Mirko Vucinic went close with a volley in the 14th minute which forced Christian Abbiati into a smothering save.

Robinho went close for Milan early in the second half with a curling shot which hit the post and Kevin Prince Boateng shot narrowly wide on the hour mark.

Roma became more adventurous as the game wore on but offered little to really trouble the new champions and at the final whistle, Milan were comfortably in control -- much like they have been all season.