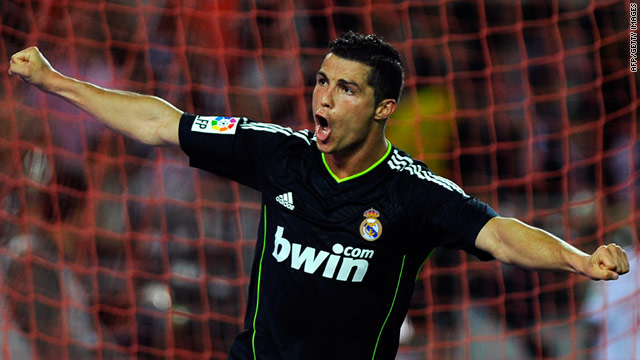 (CNN) -- Four goals from Cristiano Ronaldo laid the foundation for a thumping 6-2 win for Real Madrid over Sevilla on Saturday.

The win keeps Madrid's slim chances of overcoming leaders Barcelona alive, reducing the gap between them and their rivals to five points. Although Josep Guardiola's team can restore their eight-point lead with a win over Espanyol on Sunday evening.

Sergio Ramos opened the scoring for Madrid after 22 minutes before Ronaldo weighed in with his first of the night nine minutes later, with Kaka adding a third before half-time.

Alvaro Negredo pulled one back for the home side on the hour mark but three Ronaldo goals in the space of ten minutes shortly afterwards killed any hopes of a revival stone dead.

Negredo bagged his second of the night with six minutes remaining but it was the Portuguese winger's night as his fourth goal saw him move one ahead of Lionel Messi's league goal tally of 32.

All goals came in the first half -- Soldado scoring in the 17th and 37th minutes while Brazilian Jonas Goncalves netted after 25 minutes. The win consolidates Valencia's grip on third place although Villarreal can reduce the gap from six to three points with a win over Mallorca on Sunday.

Seventh-placed Atletico Madrid lost 3-0 to Malaga who recorded their fourth successive win in La Liga thanks to goals from Jose Salomon Rondon on the half-hour mark, followed by a Julio Baptista header five minutes later before Enzo Maresca added the third six minutes before the final whistle.

Athletic Bilbao defeated Levante 3-2 as they continue their quest for a Europa League spot next season.

Bilbao surged into a three goal lead after little more than a hour played with goals from Gaizka Toquero, David Lopez and Fernando Llorente. But Levante staged a late comeback banging in goals in the 77th minute (Christian Stuani) and in the 86th minute courtesy of Victoriano Nano to set up a tense climax, but the home side held on to claim the three points.

Getafe gave their supporters hope that they might avoid relegation after a 2-0 win over bottom side Almeria. Goals from Adrian Colunga and Pedro Rios lifted them out of the relegation zone and up 15th place with 40 points.

Racing Santander looked to have ensured their survival in La Liga after a 3-2 win over second-from-bottom Hercules.

Giovani dos Santos opened the scoring for Santander in the 14th minute before Sendoa Agirre equalized for Hercules five minutes before halftime which ushered in a frantic passage of play.

Giovani restored Santander's advantage a minute later, before Tiago Gomes made it 2-2.

Henrique capped a madcap five minutes with a header in stoppage time and ultimately sealed the win for Santander.