Barcelona close to within a point of Spanish crown 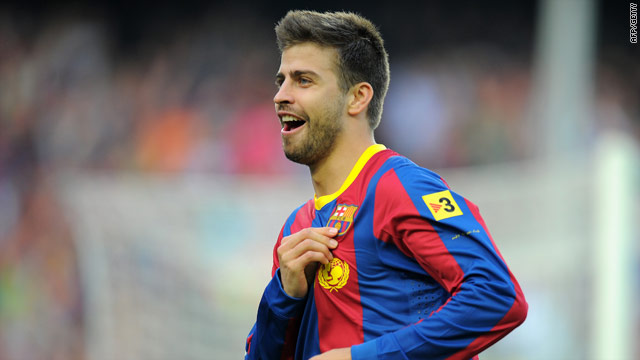 Goals from Andres Iniesta and Gerard Pique have taken Barcelona to 91 points, eight ahead of Real Madrid, who thrashed Sevilla 6-2 Saturday to keep alive their slim hopes.

Barcelona will clinch the title Wednesday night if they avoid defeat against Levante.

They will then turn their attentions to the Champions League final against Manchester United on May 28 at Wembley.

It was not a vintage display by Pep Guardiola's men in the wake of their Champions League semifinal second leg tie against Real Madrid in midweek.

But World Cup winner Iniesta found room for himself to shoot home in the first half after 20 minutes with Pique heading home from a Xavi corner at the start of the second.

Espanyol, who are still chasing a Europa League place, offered stiff resistance in the Nou Camp, but Barcelona were always in command and Eric Abidal came off the bench for a second appearance after his successful recovery from a liver tumor.

Valencia look set to finish third behind Barca and Real as Mallorca and Villarreal drew 0-0.

They lead Villarreal by five points after their 3-0 win over Real Sociedad 24 hours earlier.

"We can say that we have got a point which takes us closer to a place in the Champions League although obviously a win would have been better," he told AFP.

Osasuna scored a fine 3-1 away win at Real Zaragoza in Sunday's late game to ease their relegation fears.