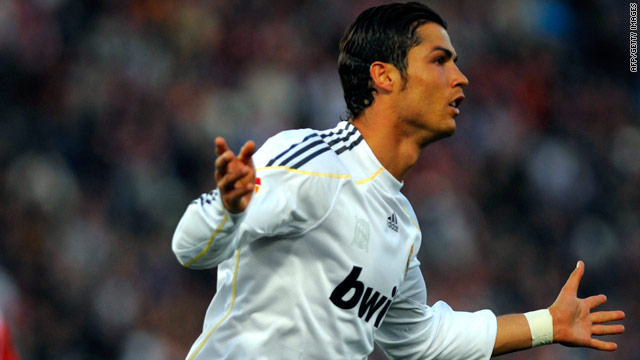 The Portuguese winger scored four goals in Saturday's 6-2 thumping of Sevilla, and his latest treble puts him on 36 league goals for the season -- five ahead of nearest Golden Boot challenger Lionel Messi and within sight of the record goals tally of 38 in a season jointly held by Hugo Sanchez (Real Madrid) and Telmo Zarra (Athletic Bilbao).

Ronaldo's treble sees Madrid move to within five points of Barcelona, but Pep Guardiola's side need just one point from their final three league games to win the title for a third successive season -- and will be crowned Spanish champions if they draw at Levante on Wednesday.

Real took the lead on 23 minutes when Mesut Ozil's superb cross from the right was powerfully headed home by Ronaldo.

And German international Ozil set another up for Ronaldo on 57 minutes when he cut the ball back for his teammate to stroke into an empty net.

Substitute Karim Benzema added a third with 20 minutes remaining and Ronaldo completed his hat-trick with a late penalty.

In other matches on Tuesday, Deportivo La Coruna edged closer to avoiding relegation with a 2-1 victory over Athletic Bilbao -- a result that lifts Depor out of the bottom three.

Elsewhere, Atletico Madrid suffered a surprise 2-1 defeat at Racing Santander, while Malaga made it five consecutive league wins for the first time in their history with a 2-0 home victory over relegation rivals Sporting Gijon.

Brazilian Julio Baptista scored for the fifth successive game to help Malaga move six points clear of the relegation zone and to the brink of safety.

Meanwhile, in Italy, newly-crowned Serie A champions Milan have failed in their bid to win the league and cup double after losing 2-1 at Palermo in the second leg of their Coppa Italia semifinal.

The tie was finely poised after the first leg at the San Siro ended in a 2-2 draw, but this result means the Sicilian side will now face either holders Inter Milan or Roma in the final on May 29 as they go in search of their first-ever silverware.

The home side went ahead in the 63rd minute with a Giulio Migliaccio diving header from a corner and they doubled their advantage 10 minutes later when Cesare Bovo scored from the penalty spot after Mark van Bommel was sent off for bringing down Josip Ilicic in the area.

Bovo himself was then sent off for a high challenege on Alexandre Pato and Milan scored a late consolation goal when Zlatan Ibrahimovic converted Antonio Cassano's deflected pass.